Zynga (NASDAQ:ZNGA) is a San Francisco-based mobile game company named in honor of Zinga, the deceased dog of its founder and former CEO Mark Pincus. It’s logo is a red dog. Its headquarters is known as “The Dog House,” which it owns and has been its most impressive acquisition to date.

This article is an update to our June 2014 article for SA, Zynga is a Dog Without a Top 10 Mobile Hit.

During its 1Q14 conference call, CEO Don Mattrick narrowed the FY14 booking guidance to between $770M-$810M. We said that was attainable only if Zynga had a Top 10 mobile hit.

During its 3Q14 conference call, Mattrick narrowed guidance for 4Q14 bookings to between $183 and $213 million.

Our advice is to let this sleeping dog lie.

If you own this stock, hold. If you don’t own stock, stay away until this dog wakes up as evidenced by a new release with a Top 25 revenue rank.

Don’t be fooled into buying based on recently-released Looney Tunes Dash! sporting a Top 10 download rank. Monetization matters and the rabbit doesn’t have it. The bunny isn’t money.

Mattrick gave 4Q14 bookings guidance of between $183 and $213 million based on the following expectations:

Below is a table of App Annie revenue rankings for games on iOS Apple Store USA, by far Zynga’s biggest market, by quarter beginning dates.

When you combine all casino slot games, we would say that slots revenue was up in 4Q, but that it was wiped out by the downtrend in Zygna’s tentpole game FarmVille 2: Country Escape. 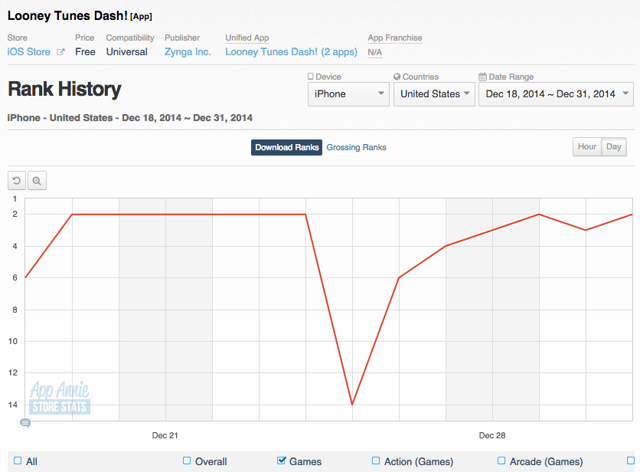 However, the game has yet to crack the Top 50 in revenue rank. 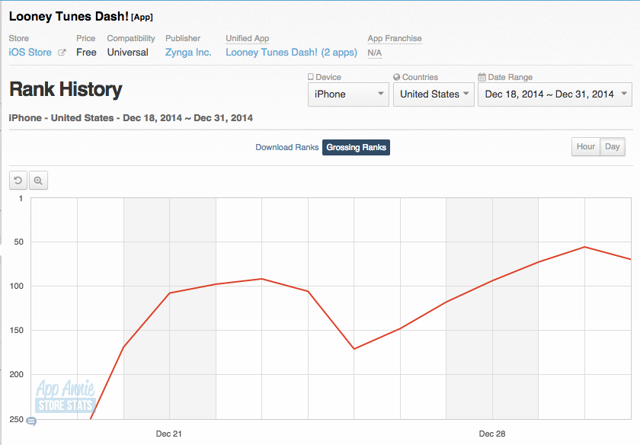 Below is the download rank chart for New Words with Friends. Notice the impressive early Top 5 download ranking during the period before December 2, 2014 when the game was totally free without ads or freemium elements. 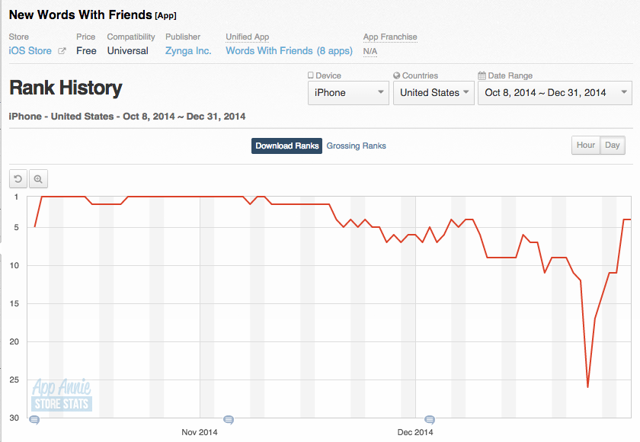 Here is the revenue rank chart which began with a December 2, 2014 update that added freemium elements. Monetization has been poor to say the least. 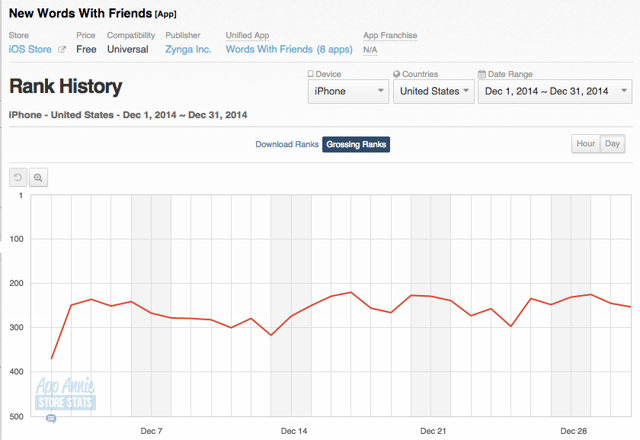 In sum, we rate Zynga a hold, optimistic that this sleeping dog will awake eventually with vigor that lasts long enough to reward patient investors.

There are a few things that might awake this dog: (1) a release from recent acquisition NaturalMotion that is a hit; (2) better monetization from casino slot games, possibly with redeemable perks at Vegas gaming establishments; (3) reconsideration by CEO of real money gaming; (4) purchase of company that makes Trivia Crack.