On October 31, 2014, The Bancorp (NASDAQ:TBBK) announced that it was discontinuing its commercial lending operations. Based on an independent third party review, it set aside for sale a loan portfolio with a fair market valuation of a 6.8% discount from its $1.2 Billion principal.

Two months later, on the next to the last business day of the year when most of Wall Street was home making New Year plans, the bank issued a terse 8-Kstating that it had sold a partial $267.6 Million loan package that had been marked down in October to $213.5 Million. The sale was to a newly created LLC, financed largely by the bank itself, (more on that later) for $209.6, resulting in a small loss on sale of $3.9M.

This end of year transaction caught our eye. We did the numbers and found a huge discrepancy between the overall loan portfolio markdown of 6.8% and the 20.2% markdown of the piece sold in December. The December partial sale implied that the remaining 78% of the portfolio still on the bank’s balance sheet was covered by only a 3.0% markdown.

Below is a spreadsheet, which shows how we arrived at this implication. An earlier version was presented in our January 2015 SA article on The Bancorp. 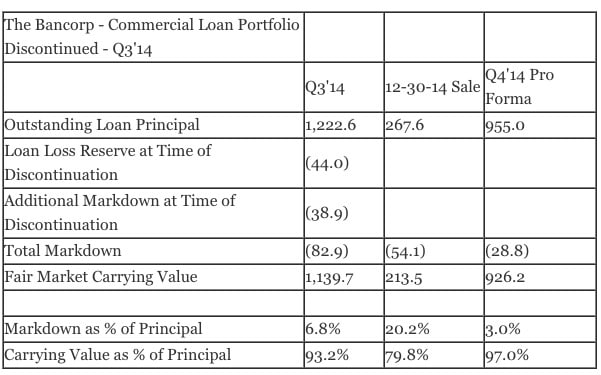 As a consequence of this lack of communication, the stock dropped 22.8% from $10.89 on December 31, 2014 to $8.41 on February 2, 2015.There was nothing in the terse December 8-K to assure investors that the remaining portfolio on its books was marked fairly. Management should have told investors that it had a plan to sell the portfolio in pieces with the most toxic piece sold first. 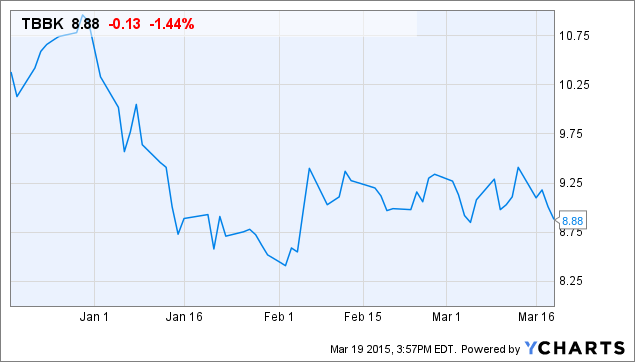 Only during its Q4’14 conference call, thankfully transcribed by SA, did the bank make it clear that it had a plan. It also reassured investors that the remaining 78% piece was fairly marked.

Finally, the CEO Frank Mastrangelo offered investors a time frame during which the bank hoped to complete the sale,

… we will have some of the sales bleed into Q2 although it’s certainly possible and plausible that some will still occur this quarter.

As a result of these February clarifications, the stock has recovered somewhat rising 11.2% to $9.35 a share as of the date of this paper. Fast forward to today (3-24-15) and still no sale. The longer this continues, the greater will be the bank’s problems.

While the problems are general to cases of continuing discontinued operations, we will argue below that they are worse for a highly leveraged, regulated bank like The Bancorp. Furthermore, we will argue that The Bancorp specifically has made a bad situation worse.

Management, including the bank’s former long time CEO Betsy Z. Cohen and its current, long time Board Chairman Daniel G. Cohen have to be held accountable for this continuing problem. The problem can be broken down into interrelated issues with pricing, accounting, and management. We detail below The Bancorp’s problems:

The speed at which assets are sold is a function of price. Fairly marked assets should sell fairly quickly. In turn, price is a function of terms. Set a high nominal price but offer liberal seller financing and the sale closes faster at the high nominal price. As evidenced by the December sale, The Bancorp will go to great lengths to extend terms to close a loan sale without dropping price below its prior mark (more later).

Lack of time to shop this portfolio or lack of time for potential buyers to perform “due diligence” cannot be the reason for this delay as it has been 5 months since this portfolio was first officially marked “for sale.” The conclusion has to be that our estimated 3% markdown of remaining portfolio is insufficient to close a sale. If it were a matter of having to concede 1% or 2% more, the bank would have done so and booked a small loss in 2015.

For most corporations, conceding an additional 5% to 10% markdown to sell a discontinued operation would be bad, but not catastrophic. Not so for regulated, highly leveraged commercial banks. Especially not so for The Bancorp, who already is at the low end of various bank equity/asset ratios.

Also, taking this kind of hit upon sale now would taint 2015 earnings. The bank would have been better off taking the hit in 2014. But wait a minute… On March 16, 2015 the bank filed something called an NT 10-K – A Non-Filing Notice to the SEC stating why it failed to file its Annual 10-K report within the allotted 75 days.

It now has until March 31, 2015 to submit a final 10-K. Doing this allows the bank to record any additional markdown as a loss in 2014 rather than 2015. The reason given for this failure was that it needs more time to finalize its accounting for the Q3’14 discontinuation event and for the Q4’14 sale of the toxic piece.

Filing an NT-10 is a significant event. It can signal the existence of a major accounting debate between management and its auditors. It also can signal a last minute capitulation and reversal internally over how a company accounted for a prior event.

We have called investor relations at TBBK and left a message, asking for a comment to our estimation that they will be making a significant 5% to 10% additional markdown by March 31st. They did not return our call.

We view the Bancorp’s filing as a signal that by March 31st, they will be recording an additional 2014 markdown loss, thus sparing a hit to 2015 earnings. In light of how long this has dragged on without a sale, our belief is that the bank will be taking an additional 5% to 10% markdown needed to close a cash sale within the next month.

But, this additional markdown will not mark the end of The Bancorp’s continued involvement with its discontinued operation. It had to resort to seller financing to close the sale of the toxic piece in December. See the spreadsheet below of how The Bancorp financed this sale: 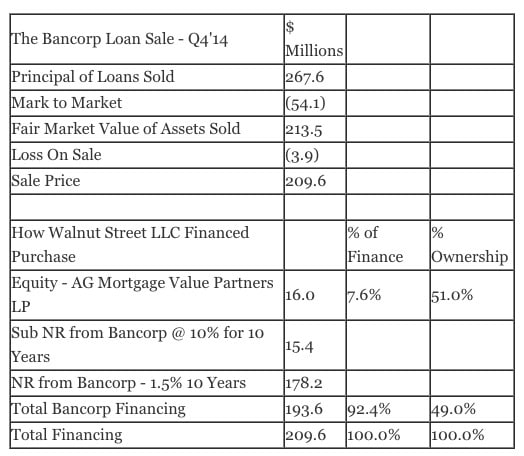 When asked in the February 2015 conference call whether the bank would resort to seller financing again, CEO Frank Mastrangelo said

It’s certainly not the first option or priority, would we consider it in the right transaction, possibly but just not certain there is going to be a need to do that.

Remember price is a function of terms. You can always get your asking price if you are willing to provide liberal seller financing. If the remaining portfolio does close without significant additional markdowns, our bet is that the bank accomplishes via continuing involvement (off-balance sheet, of course) in this discontinued operation.

Employees can be expected to jump ship when any corporation declares an operation “discontinued.” And if the discontinued operation is “knowledge worker” intensive, as is the case with a commercial loan operation, resignations can result in a significant deterioration in financial metrics.

This has been the case in spades with The Bancorp. On January 8, 2015, the bank’s Executive Vice President, Arthur Birenbaum, who had been in charge of this discontinued operation, handed in his resignation. He had served the Cohen family, founders of The Bancorp, for the last 25 year in various capacities.

Four days later, it was reported that Mr. Birenbaum had been hired by the Cape Bank of Atlantic City to set up a new commercial loan operation in The Bancorp’s home territory of Philadelphia. It can be assumed that since the middle of January 2015, Mr. Birenbaum has been contacting and later hiring loan officers from The Bancorp’s discontinued operation.

This means that for the past 3 months, The Bancorp’s commercial loan operation has had no experienced manager and few engaged loan officers. Surely, this lack of management has increased servicing and collections problems.

Additional disclosure: On Thursday, at the suggestion of our SA editor, I called Investor Relations at TBBK and left a message asking specifically if they intended to make an additional mark down to their discontinued loan portfolio in the range of 5% to 10% by March 31st. They did not return my call and I noted that in the article