Two days after Christmas Day 2017,  we checked out App Annie to see which paid and which free-to-play mobile game (f2p) with in-app purchases (IAP) spiked into Top 10 revenue rank.

You see Christmas Day is #1 day of the year for paid mobile game purchases and IAP for f2p games.

Our thesis is that game that spikes in revenue rank to the Top 10 on Christmas is the best game of the year.

We have been using App Annie to value mobile game startups since 2013.  Just after Christmas 2014, we noticed that the paid game “Five Nights at Freddy’s” by indie developer Scott Cawthon spiked to #10 on Christmas Day. 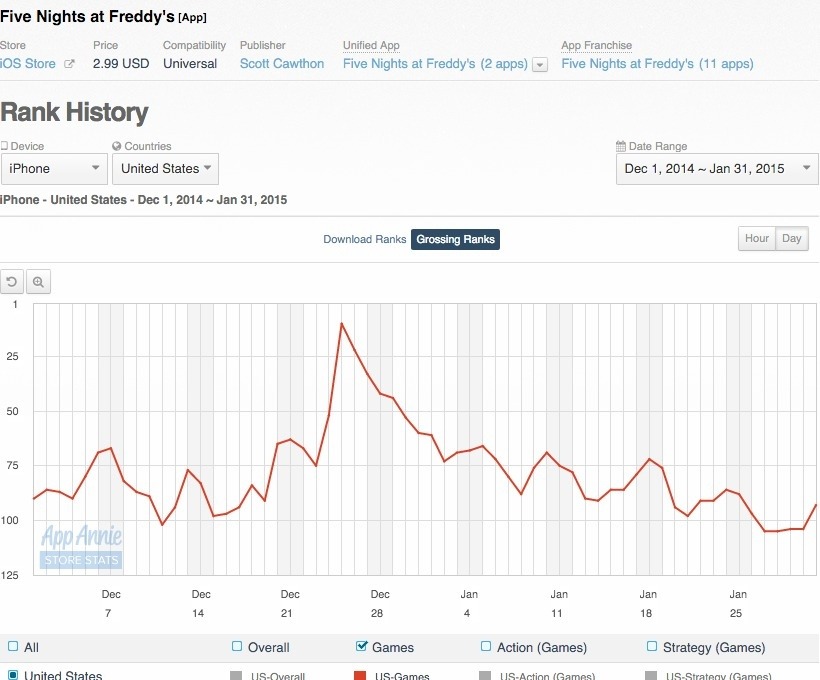 We thought nothing of it at the time.  Later, in April 2015, we published an article on the game called Life Lessons From Five Nights at Freddy’s.  In November 2015, we answered the following question posed  by a mobile game developer on Quora:  What’s the best time to release an iOS game to get maximum downloads?  Our answer on Quora was:

In terms of paid games, the absolute best time to launch is before Christmas day.  This is because many kids receive Apple iTunes gift cards for Christmas and spend Christmas day downloading all the paid games on their “wish list”.

Last Christmas Day December 25, 2014 belonged to Scott Cawthon’s Five Nights at Freddy’s  where the  $2.99 paid game shot up to #10 revenue rank on iOS Apple USA according to App Annie analytics.

Between 2015 and 2017, we did not look for Christmas favorites on the App Store. We were too focused on exposing the bad guys of mobile gaming rather than the good guys:

Kabam: $800 Million Bid Is Both Lifeline And Death Knell

And the Korean company, Netmarble, who bought Kabam’s Vancouver studio and then proceeded to wreck two game communities with Patch 12.0 for Marvel: Contest of Champion and Patch 6.3 for Marvel: Future Fight

But, just when we couldn’t get any more depressed about mobile game companies as we witnessed Netmarble’s destruction of the Marvel:Future Fight community,  we just happened to check out the App Annie charts for Christmas.

Low and behold, who did we discover spiking to #3 on Christmas day and #2 on the next day  but 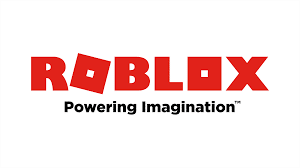 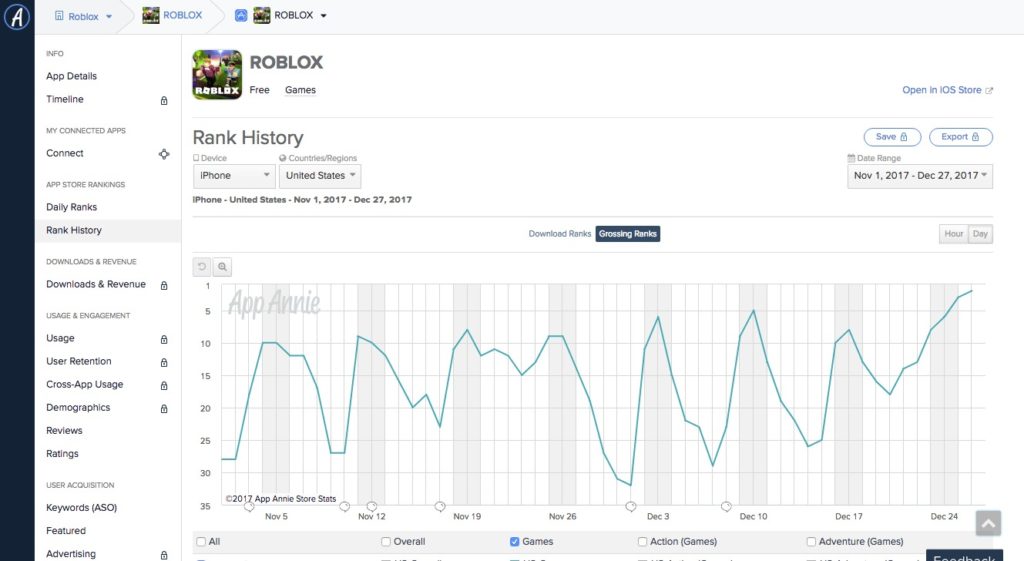 Note: the spikes in revenue rank coincide with Fridays – Sundays.  Unlike “grinder” or “play or be destroyed” mobile games, you can put Roblox down during the week, then go back to it on the weekend without any loss in game assets.

And, we expanded the App Annie chart to discover that Roblex had been building a stronger and stronger community FOR YEARS. 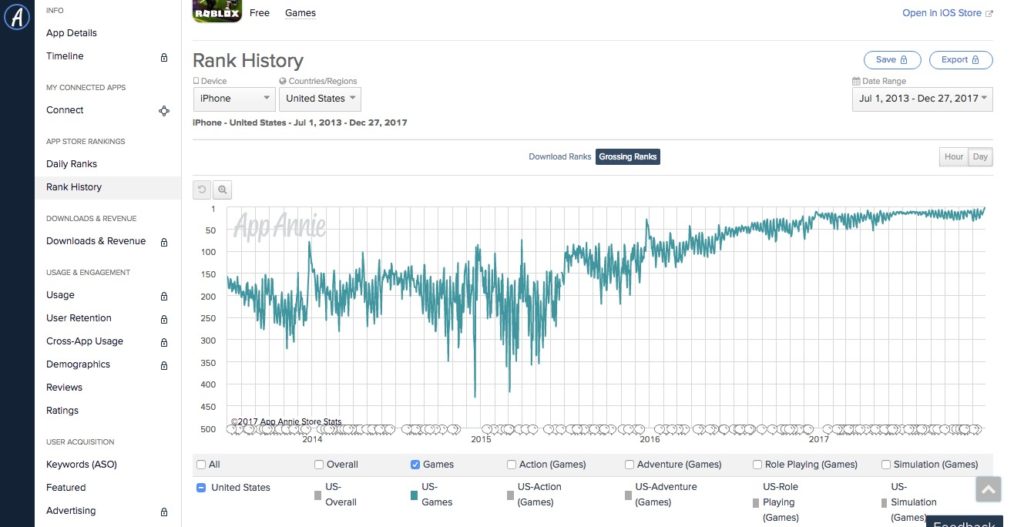 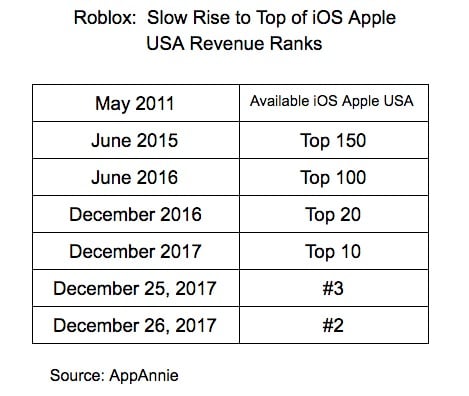 We are so happy for Roblox.  Spiking to #2 on App Annie charts the day after Christmas 2017 is a sign to us that Roblox is the mobile game and company of the year.

Roblox has integrity.  No crass monetization like Netmarble’s  random number generator (RNG)  lockboxes introduced in their Patch 6.3 of Marvel: Future Fight.   No radical nerfing of Champions like what Kabam and Netmarble did with Patch 12.0 for Marvel: Contest of Champions

We are not going to spend much space talking about Roblox the game or Roblox the company.  You can read it here on their website

Speaking of YouTube,  we wonder if the folks at Roblox know that their studio is located right across the street from the 2005 original office of YouTube.       (BTW, San Mateo is happening for startups) 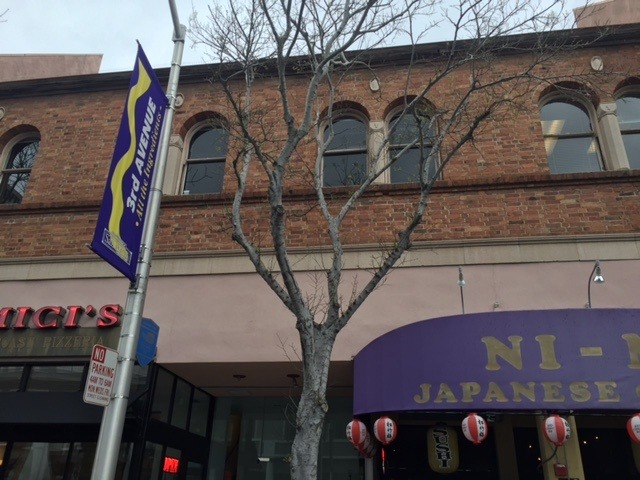