From two of my recent Quora posts:

Question: How much money does the average mobile game make?

There are tons of games on the App Store and Google Play. Everyone seems to know about the hit games. How much revenue does the run-of-the-mill game generate? Is the revenue curve steady and flat? Do some genres do much better than others?

Question should be rephrased:

Relation between mobile game revenue and revenue rank is a severe power function, more severe than the bookstore relation estimated 10 years ago and used to justify “long tail” inclusiveness in online stores.

Question: How can you estimate the revenue of a mobile app based on its revenue rankings in App Annie?

There should be an exponential drop off, so if someone has done a study with a few data 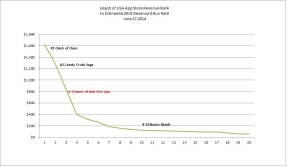 As far as games, these are my current estimated revenue run rate after 30% store cut worldwide on iOS and Google (note portion of revenue is 4:1 iOS to Google)

This is a lot less that the original “long tail” estimates for book sales of book ranked 10,000+ of around 30%

Not much loss in cutting out the “long tail” in mobile games on the app store in return for great gain in app store discovery and quality of merchandise.