Netmarble is the ninth largest mobile app game publisher in the world and the largest in South Korea. In a month, the company is set to raise $2.3 Billion via an IPO on the KOSPI Korean stock exchange.

If successful, the company will be valued at $11.7 Billion and catapult it to the level of Supercell and MZ (formerly Machine Zone) as one of the top 3 most highly valued mobile game companies in the world.

While doing research on Netmarble, we began to see that the aggressive pricing of its IPO was not the only instance of what we considered to be a pattern of greed as defined by making choices favoring short term gain at the expense of long term gain.

For one, Netmarble had a history of overworking its Korean workers.  So much so that employees pulling “all nighters” before every game patch started calling its highrise HQ in Seoul  “the lighthouse”.

As Netmarble’s IPO date grew nearer and investor scrutiny intensified, the company changed its work hours policies, saying it would ban “all nighters” and weekend work.

The purpose of this paper is to explore in detail another instance of Netmarble greed:  how it has managed a recent $710 Million acquisition of the Vancouver studio of the fallen USA mobile game unicorn Kabam.

Netmarble has repeatedly stated that its long term growth strategy hinges on growth outside S. Korea.  This includes localizing its Korean hit game Lineage II: Revolution for the Chinese market. It also includes acquisitions of studios in the West with games generating $100+ Million in annualized revenue (ARR)  like Kabam’s Marvel: Contest of Champions (MCOC).

Our interest in Netmarble stems from a long running interest in Kabam.  We have followed the the ups and (mostly) downs of Kabam for the last three years, focusing mostly on valuations based on App Annie app store revenue rank trends. Below is a list of our articles chronicling the fall of Kabam and its causes.  They are available on our blog GloMo Investing:

On October 18, 2016, VentureBeat reported that an unidentified company had made an $800 million offer for Kabam’s Vancouver studio.  That studio had been responsible for the only game keeping Kabam alive at the time:  Marvel: Contest of Champions (MCOC).

The Vancouver studio also was valued for the game engine behind MCOC and for the hit potential of another game in final development based on Transformer IP licensed from Hasbro. At the time, MCOC was a #9 revenue ranked game with our estimated global annualized revenue run rate (ARR) of $250 Million. We noted at the time that the bid seemed right for a studio + hit game + game engine as long as the two-year running MCOC could sustain a $250 Million ARR.

On December 19, 2016, it was announced that Netmarble was the successful bidder. The bid was later officially pegged at $710 Million based on Netmarble’s IPO filings in late March 2017.

Throughout 2016,  Netmarble talked about an IPO.  It played up its plans to use  the proceeds from the IPO  to buy USA-based companies knowing that the mobile game market in the USA was six times that of S. Korea.  It was especially important for Netmarble to demonstrate its acquisition prowess before its IPO, given that it had narrowly lost a bid for the social casino game company Playtika in June 2016.

What follows is a closer look at the way Netmarble has managed two major software releases since it closed the deal for the Vancouver studio just two months ago. It is evidence of a kind a greed that favors short term monetization over long term player engagement.

The first instance of a disastrous release — the now infamous MCOC Patch 12.0 — was released on March 1, 2017 just one week after Netmarble closed the acquisition on February 23, 2017.  The other was the design and release schedule of Transformers: Forged to Fight (Transformers).

Even though development of both started before Netmarble took over, the final releases were made on their watch. Netmarble could have stopped these releases, mandated more player friendly designs that would sustain engagement even if that meant less revenue in the short run.  But they did not.

Using the AppAnnie iOS USA app store revenue rank trend line below, we will show the context and likely rationale for MCOC Patch 12.0.

Player criticism was instantaneous led by a YouTube video entitled “Patch 12.0 is Terrible” by MCOC Youtube channel celebrity Seatin Man of Legends. It quickly spread.    On March 6th, the MCOC development team issued an official apology, said it heard the criticisms, and would issue a fix shortly. Note that on the day of the apology (fourth red line), MCOC broke below #20 first time in two years.

Here is a more detailed App Annie chart for the last year that shows MCOC fade starting in mid-2016:

You might think that a slight fade from a consistent Top 8-10 revenue rank game to a Top 10-15 game is insignificant. But,  in the mobile game world, there is a strong power function relation between revenue dollars and revenue rank.

Below is our reconstruction of global annualized revenue of top ranking games currently on the iOS Apple app store charts as a function of rank. The iOS USA numbers are from Think Gaming,  which we believe are algorithmically derived and smoothed out rather than actual tallies.

Over the years, we have used this simple rule of thumb to derive global revenue of top ranking games on Apple iOS USA — companies that generally derive the bulk of their revenue in the USA as opposed to Asia or Europe. 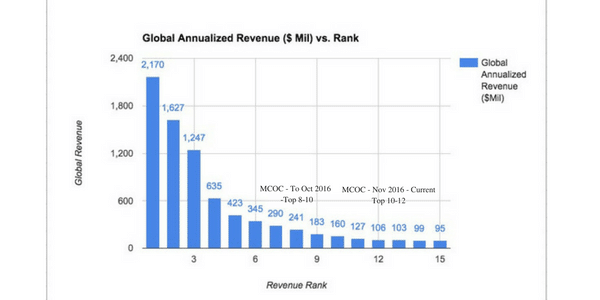 Obviously Kabam was acutely aware of MCOC’s fade and its implications for the value of the Vancouver studio. Also, Netmarble must of been aware when it turned its eye to Kabam after its June 2016 failed bid for Playtika.

Given the extent of the changes involved in Patch 12.0, the development team must have began work about two months after the start of the fade, say around August 2016. As Kabam and Netmarble were closing in on a deal, Kabam must have discussed Patch 12.0 with Netmarble including design choices based a trade-off between increases in average revenue per paying user (ARPPU) and the likelihood of player defection.

Kabam may even have been savvy enough to prepare several versions of Patch 12.0 with different expected ARPPU  knowing that it would be Netmarble who would make the final decision once the deal closed. Normally, before a major update to a long running game, it is customary for a development team to do two things:

Netmarble did neither.  On March 1st, the final version of Patch 12.0 was released.

There was an immediate shock and outrage by hard core players as evidenced by their vents on YouTube, Facebook, Reddit, various game blogs, and official Kabam hosted forums. Among long running hard core games, the level and breadth of MCOC player outrage was unpresented.

When we googled “player revolt” plus game name, we could find evidence only of one revolt by players of  MZ’s Game of War: Fire Age.   There have been no noticeable online revolts by players of Supercell’s hit games — Clash of Clans or Clash Royale — nor of players of MZ’s other hit game Mobile Strike.

Based on our reading of these criticisms, we believe that final version of Patch 12.0 was focused to the extreme on increasing ARPPU without giving much weight to player outrage and defection.

First, beyond the questions of objective, there was a major screw-up of core gameplay mechanics that made block and parry unplayable.

Then, there was what we call widespread “devaluations” of player assets  designed to increase ARPPU.

It included diminishing the fighting power (“nerfing”) of the most popular characters, or Champions, and providing incentives to buy unpopular Champions by increasing their power (“buffing”).

Another devaluation occurred by making battle losses more costly in terms of power loss, thereby increasing regeneration costs. Finally, there was fundamental change in the scoring system with no rationale given.  But it appeared to the most experienced players that this change was designed to increase ARPPU.

Player outrage and talk of organized revolt ended abruptly on March 6th when the company officially apologized and promised rollbacks which did occur with Patch 12.0.1 on March 10th.

In the end, Patch 12.0 and subsequent roll-back likely did nothing to reverse the fade of MCOC.  But it caused irreversible loss in trust by long term players.  Players can never again be sure that accumulated investments made in MCOC won’t be subject to another Patch 12.0 type devaluation. MCOC will never again be a consistent Top 8-10 game.

Netmarble will likely hold off from making ANY major changes in the next six months to MCOC, leading to player ennui and defection to more engaging games.

Now on the the other instance where Netmarble’s greed led to decisions which caused a new game release by the Vancouver studio to be a bust. Kabam’s Vancouver studio was especially valuable to any acquirer because it had a proprietary  “game engine” called “Fuse & Sparx” thought to be capable of churning out a series of re-skinned MCOC hits.

First up was a game with MCOC-like game mechanics based on Transformers IP licensed from Hasbro called Transformers: Forged to Fight. (Transformers) Below is the countdown to the global launch of the game:

Notice that there was only a two month soft-launch before global release.  Based on App Annie charts, the game struggled in soft-launch and never cracked the Top #100 with any consistency.

Normally,  a company would add a couple more months of tweaking before making a decision to launch officially or can the game.   Given Netmarble’s May 2017 IPO date, we think that they rushed released a deeply flawed Transformer game causing it irreparable damage as the early word was that it was buggy, slow to load, and freezes.

Even if the game’s bugs could be cleaned up, early players of the game reported that it is “too complex to play”  and there is “kitchen sink” approach to development with a mashup of game genres and a mind-numbing complexity to scorekeeping and purchasing.

To us, this suggests that the priorities were early monetization over long term player engagement. Below is the revenue rank trend of the game: 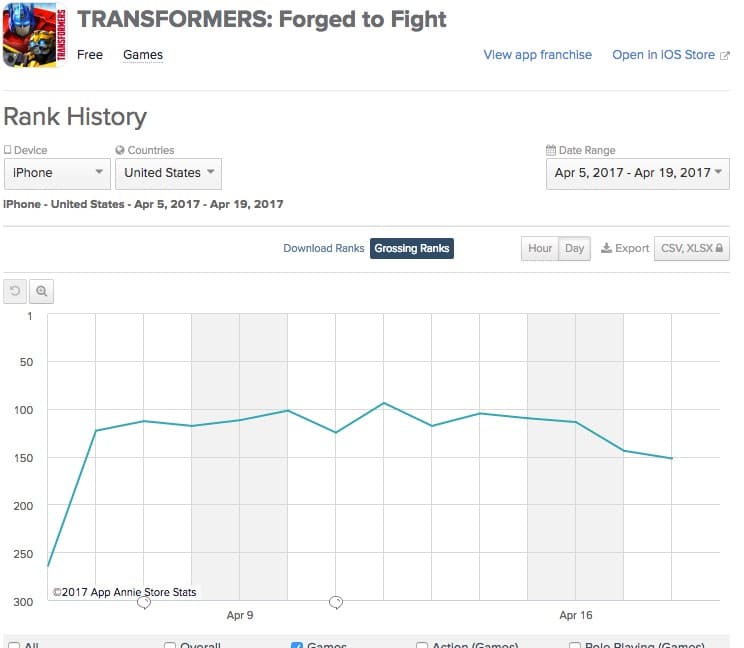 Our four years of reading App Annie charts suggests that there are no more “late bloomers” in the mobile game world. If a newly released game does not crack the top 50 in the first few days, it will never crack the Top 10. The Transformer game is a major bust for Netmarble.

But worse, it raises doubts about the hit making ability of  Vancouver’s game engine “Fuse and Sparx.”  Could the success of MCOC be due more to the original team that developed it, long since gone,  and not its game engine nor the current team?

The bust of the Transformer game and the fiasco of MCOC Patch 12.0 raises serious doubts about Netmarble’s ability to manage future acquisitions in the West.

Will Netmarble’s greed once again force newly acquired companies in the USA to release their own Patch 12.0?

Will Netmarble’s greed force acquired companies in the USA to junk up games similar to what happened with Transformers: Forged to Fight?

Netmarble’s IPO will give the company  $2.4 Billion to make acquisitions of USA-based companies with current Top 20 hits.  This would include the privately-held companies Pocket Gems, Product Madness, and Jam City, a company already with a $100 Million Netmarble investment.

It would also include the publicly-held company Glu Mobile and the Com2uS, a company listed on the Korean exchange, but with most of its revenue coming from its global hit Summoners War.

Unless Netmarble can change its focus to long term player engagement over short term monetization boosts, we think that they will destroy future acquisitions just like they destroyed Kabam’s Vancouver studio in two short months.