Our analysis of Netmarble’s IPO was that it was “priced for perfection”.  While the Lineage 2 game releases has been near perfect in Korea and Japan, its release in the USA has been a bust and the release in China is on hold due to geopolitical tensions.

As a result, we predict that Netmarble’s stock will fall 45% from its November 26, 2017 closing price of 188,500 KRW to around 103,378 KRW once the revenue impacts of the USA and China releases are fully understood by investors.

On May 11, 2017, Netmarble Games had an IPO on the Korea KOSPI stock exchange.

Due to an enthusiastic demand by Korean, International, and Sovereign funds, the company was able to price the IPO at the high end range of 157,000 Korean won (KRW) per share, or approximately $138 USD per share based on an exchange rate of .00088 KRW / USD.

Three days before trading began,  analyst Moon Ji-hyun with the Korean brokerage house of Mirae Asset Daewoo predicted that the company would exceed expectations for YoY revenue and profit doubling.  She gave the stock a price target of 200,000 KRW, or a 27% increase from the IPO price.

Most other financial analysts and business reporters wrote positively about the company and its IPO.

Within the first hour of trading, individual retail investors pushed the price up to 171,500 KRW. The stock closed the day at 162,000 KRW, making the funds, the underwriters, the company and its CEO Bang Jun-hyuk very happy.

We alone differed.  (Disclosure: we have never held a position in the stock and do not intend to initiate one at anytime.  We have not received any remuneration for our articles on Netmarble.)

Three weeks before the IPO, on April 18, 2017 we analysed the offering and estimated that Netmarble’s post-IPO forward price sales ratio would be 4.3.  This was based on FY17 YoY reported sales forecasts of a revenue doubling — largely driven by its newly released game Lineage 2: Revolution.

We found that Netmarble’s post-IPO valuation exceedingly high by both South Korean and Western standards for mobile game companies. 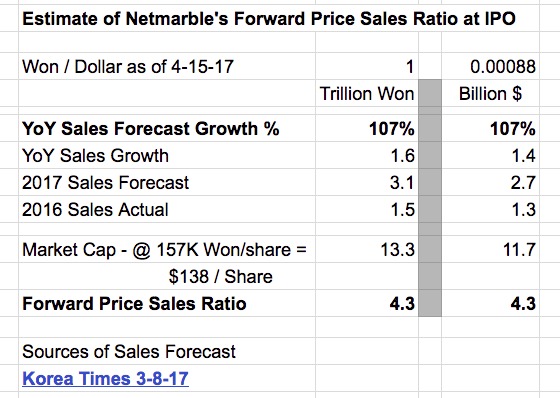 Our assessment in April 2017 was that Netmarble’s IPO was “priced for perfection” based on a forward price sales ratio of 4.3.  We wrote another paper in May 2017 predicting that the stock would fall 33% from the IPO price to around 105,000 KRW once investors realized that Netmarble’s 2017 sales would fall short of expectations.

To Netmarble’s credit, its performance has been near perfect in the Korean and Japanese releases of Lineage 2.  After a couple of months of drifting downward,  the stock has recovered 47.8% from a low of 127,500 on August 11, 2017, largely due to the strong Japanese release. 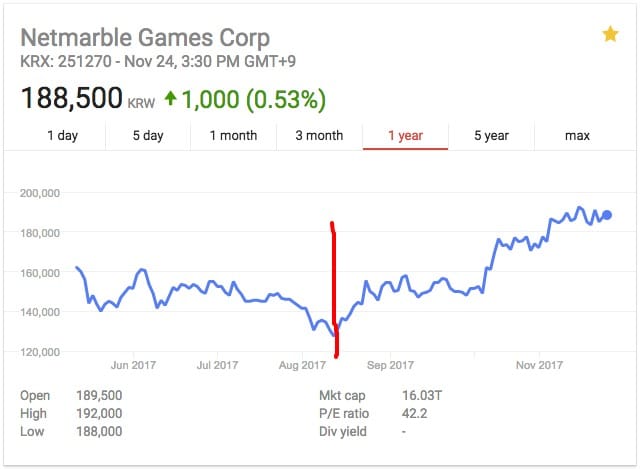 On November 15, 2017, Netmarble released Lineage 2 in United States. Our assessment is that the release is a bust as games destined to be long-lasting hits in the USA usually crack the Top 10 iOS revenue rank on the App Annie charts within weeks of release.  The game has now sits at revenue rank #30 which we estimate translates to an annualized run rate in the neighborhood of $75 Million.

Below is the App Annie USA iOS revenue rank chart for Lineage 2: 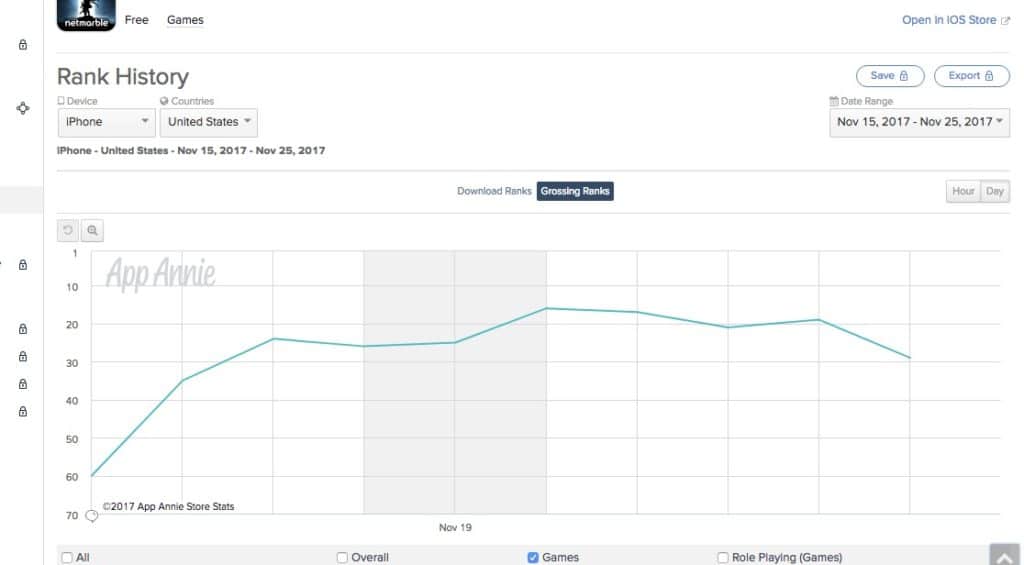 The stock market has yet to factor in Lineage 2’s bust in the USA.

Also, the 2017 scheduled release of the game in China has been delayed due to geopolitical tensions between the two countries.

Below is a summary of Netmarble’s game performance in 2017 to date: 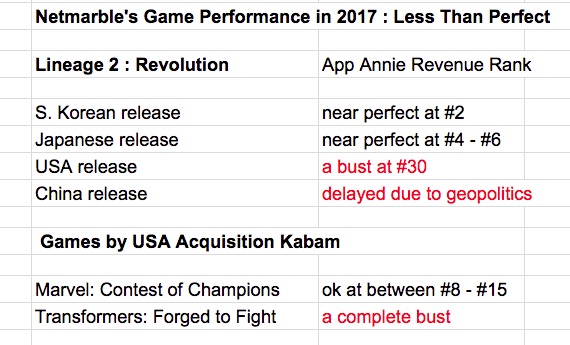 While Netmarble’s 4th quarter revenue figures should be at an all time high due to the successes of Lineage 2 in Korea and Japan, we forecast that Netmarble will miss analysts’ full year sales estimate of $2.3 Billion (2.5 Trillion KRW), or a revenue doubling,  by 14.8%. 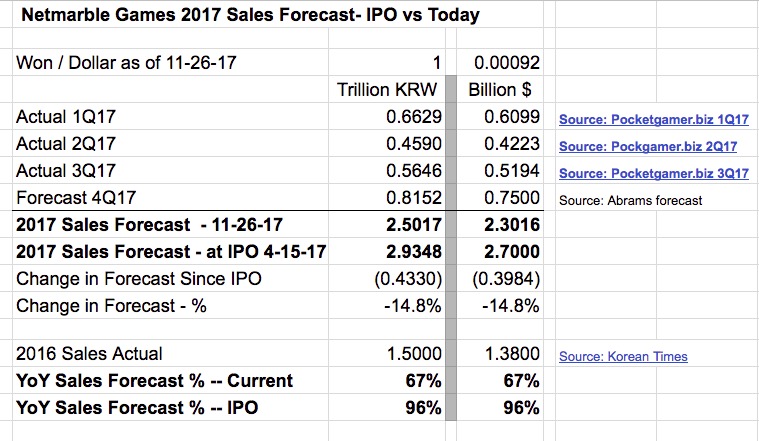 We do not believe that the revenue impacts of the failed USA release and delayed China release are fully understood by investors.  The realization that Netmarble will fail to meet full FY17 revenue doubling forecasts should cause a compression in Netmarble’s IPO valuation multiple of 4.3 times sales. 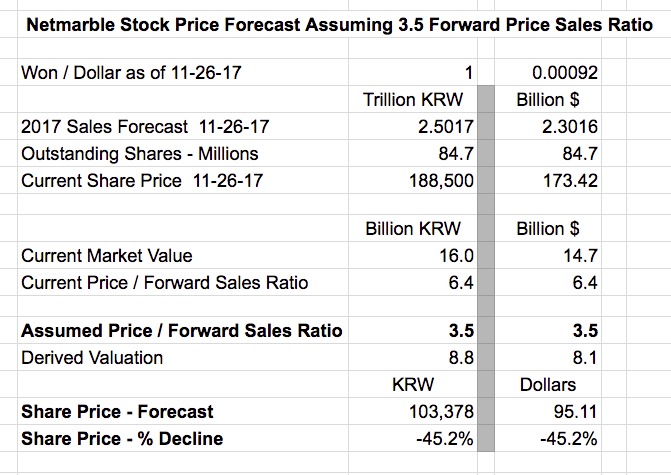