• Markit’s IPO is set for Wednesday, June 18th. It is a buy. Its core product are prices and indices that facilitate the buying and selling of credit default swaps.
• Its biggest threat is its own Board of Directors – a bank cartel which wears multiple hats as supplier, customer, dominant shareholder, and underwriter.
• We use a game theoretic approach to analyze Markit’s prospects, suggesting that this moat’s moat is a doomsday machine defense.
• Even at our estimated trailing P/E ratio of 30, it is a buy.
• In doing so, you will be able to brag that you outdid Buffett because you are buying the moat instead of a company with a moat.

“In business, I look for economic castles protected by unbreachable moats.” – Warren Buffett

They also have created a series of branded indices, representing particular classes of ABSs and CDOs, much like the S&P index, that are traded. This includes the well- known brands Markit CDX™, iTraxx®, and iBoxx®

So, don’t spend too much time trying to figure out what Markit does or poring over their financials, which I will summarize below. Just buy it. (Swoosh)

For those financial wonks that want a deeper dive, I recommend a paper by Robert E. Litan called “Derivatives Dealers Club” published by The Brookings Institute. Needless to say of a Brookings-sponsored publication, the conclusions are anti-laissez faire.

By adding Markit to your portfolio, you will be able to tell friends you outdid Warren Buffett’s mantra of buying companies with moats, because you just bought the moat.

Indeed you will be buying the mother of all moats, as Markit protects a cartel of twelve of the most powerful banks in the world who make lucrative commissions brokering over-the-counter [OTC] two party trades with an estimated yearly value of $57 TRILLION DOLLARS in 2011.

Markit acts as a moat for the bank cartel by refusing to sell its data to entities who wish to start up a CDS exchange as an alternative to the banks’ less transparent, more lucrative OTC way of doing business. The reason Markit refuses is…guess?

The bank cartel owns a dominant share of Markit’s stock and sits on its Board of Directors.

Another reason to add Markit to your portfolio is that you will be adding a rare buy-and-hold stock that will around three decades from now and still be appreciating.

You can have confidence in a buy-and-hold strategy for Markit that you can’t have for tech stocks with alleged moats as evidenced by the performance of the likes of Intel, Microsoft, Cisco, and Oracle.

In some ways, Markit is similar to bond rating companies. A 30 year buy-and-hold strategy seems reasonable given these founding dates: Standard & Poor’s (1860), Moody’s (1909) and Fitch (1913). CDS will last as long as bonds and so too will the data analytics companies that first rate these financial instruments.

We wish to address now the threats to Markit’s financials. In other words, what is this moat’s moat? We think the primary threat is not the government, or potential competitors, but its own Board of Directors.

As we will summarize below, Markit is profitable with the latest FY2013 GAAP profit margin of 15.5% and an adjusted EBITDA margin of 44.4%  (See F-1 filed with the SEC in conjunction with its IPO).

But, we ask ourselves, given its critical role in the smooth functioning of a $57+ Trillion market, why is Markit not more profitable?

The answer starts with the fact that a dominant share of Markit’s stock is owned by twelve of the largest banks in the world who both broker CDS trades and supply Markit with ongoing trade data.

Markit’s financial engineers then slice and dice this data creating synthetic prices and indices, whose value is in reducing the price discovery costs of those who buy and sell CDS. Markit then licenses its products back to banks and other financial institutions including hedge funds.

The banks wear an unprecedented 4 different hats when relating to Markit: Supplier / Customer / Stockholder and Board Member / Underwriter.

From Markit’s F-1 on reducing the banks’ rights to sit on its Board:

“Reduced engagement from these financial institution customers after this offering due to their loss of a right to designate a member of our Board of Directors, or the reduction in the level of their equity ownership in us in connection with or following the completion of this offering, may cause them to reduce or discontinue their use of our products and services, their desire to work with us on new product developments or their willingness to supply data and information services to us..”

From Markit’s F-1 on customers as shareholders as underwriters:

“We have historically earned a substantial portion of our revenue from and have worked on new product and service offerings with financial institution customers that are also our shareholders. For the years ended December 31, 2011, 2012 and 2013, 43.8%, 44.7% and 42.6% of our total revenue, respectively, was generated by payments from financial institutions or their affiliates that are also our shareholders, some of which are underwriters of this offering.”

There are 3 groups who are a threat to Markit: (1) its own Board of Directors; (2) government antitrust regulators; and (3) data analytics competitors. We have no real insight into Markit’s strategy for (3).

But, Markit’s defense for threat (1) and (2) comes straight out of game-theory whose foundation is based on the work of John von Neumann and John F. Nash (A Beautiful Mind).

The defense is known as “the doomsday machine” defense, a form of Nash equilibrium in which neither side, once armed, has any incentive to initiate a conflict or to disarm.

What Markit can do is let potential threats know that if attacked, Markit will trigger a “doomsday machine” with mutual assured destruction [MAD], an acronym first coined by the great John von Neumann and made popular by the movie Dr. Strangelove.

We have become familiar with a particular application of this defense called the “too big to fail” defense that these same banks used to persuade the Federal Reserve Bank to buy its distressed ABSs and CDOs back in 2008.

Markit can turn the tables this time and use this defense against its Board of Directors.
For example, in response to a Board (bank cartel) refusal to approve a large price increase to customers (same bank cartel), Markit CEO could respond by having its systems engineers delay transmission of data, halting multi-billions of dollars of CDS trades.

The same doomsday defense is available both to Markit and its Board should governments try open up CDS trades to any newly formed, more transparent exchange as an alternative to the opaque, more lucrative, OTC trading favored by the banks.

The threat comes as a suggestion that, while imperfect, OTC trading is a known quantity. Moving CDS trading to a transparent exchange might wreak havoc on world financial markets with resulting MAD.

Compared to a game-theoretic approach to Markit’s prospects, a financial analysis of its IPO is downright dull.

Markit is very profitable, but not insanely so given its “mother of all moats” position. Its top line growth has slowed since the crisis of 2008. But, as a believer in the Minsky theory of the inherent instability of capitalism, I am confident that Markit can look forward to a “Minsky moment” every 10 years or so.

Some analysts have said that Markit’s profit levels and margins are in decline. But they are looking at GAAP figures, not EBITDA, which is on the rise.

Markit has been doing a lot of investing lately in businesses outside its core. This has resulted in poor cash flow and substantial amortization that cut GAAP numbers. Markit explicitly states that it does not intend to pay a dividend in the foreseeable future.

There is also the question of its incorporation in Bermuda, but the implications of this are beyond our expertise.

The IPO will not yield any cash for Markit as it consists totally of stock of existing shareholders. If successful, there is likely to be follow-on offerings of new stock because Markit needs cash to continue diversification through more acquisitions.

It could also be part of its doomsday machine defense as by expanding its shareholder base, it can point to more innocent bystanders that will be destroyed if attacked.

For example, it has reported that the Canadian Pension Plan Investment Board plans to invest up to $450M in this IPO. Markit could use more civic-minded stockholders like this as they could rally them in defense should anti-trust regulators encroach.

The IPO is slated for Wednesday, June 18, 2014 and is expected to be priced between $23 and $25 a share. At the mid-point price of $24, we have estimated that Markit’s trailing price-earnings ratio will be 30. The IPO price is not cheap.

But, how often do you get an opportunity to one-up Buffett by buying a moat instead of a company with a moat?

The following graphs based on its F-1 summarize Markit’s financials for the last five years. 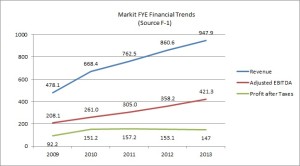 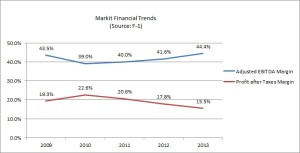 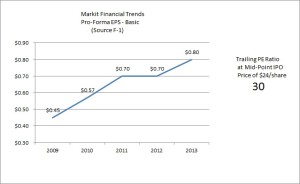