.. a real-time mobile massively multi-player online game and parallel chat-speak translation application that translates over 40 languages for its players in real-time, connecting game players around the globe at the same time in a single virtual universe.

This is how the New York Times described the real-time chat translator embedded in GoW:

The game’s most impressive feature is an instantaneous translation of text-based online chat. If someone writes “MDR” in French (for “mort de rire,” or “dying of laughter”), an English-speaking player sees it as “LOL”

GoW is MZ’s only published game to date. We wrote first about MZ in a Seeking Alpha article eight months ago, estimating then that its annualized revenue run rate [ARR] was at $831 Million with a 2.5x valuation of $2.04 Billion. We were the first to establish MZ as a $1+ Billion startup, aka a Unicorn.

Based on Seeking Alpha supplied page view metrics, our first article on MZ for Seeking Alpha has become slowly over time our top viewed article among the 21 we have written for SA in the past year.

This article is a follow-up. We update our estimates of MZ’s annualized revenue run rate and valuation. We also cite a recent interview given by the CEO where he mentions interest in licensing MZ’s chat translation engine.

We have identified two well known, highly successful companies where chat is core — Facebook’s WhatsApp and Slack, the fastest growing SaaS startup of all time. Both companies would benefit greatly by adding real-time translation to their chat core.

Eight months ago, we derived a $2.04 Billion dollar valuation for MZ. Shortly thereafter, the Wall Street Journal reported that MZ was in talks with VCs for funding that would place a $3 Billion valuation on the company. Nothing materialized.

Based on increased ARR for GoW plus interest in licensing its real-time chat translation engine, we now place a $4 Billion valuation on the company.

Yet, MZ’s name still cannot be found on any Unicorn list such as the Fortune magazine list. This is due to the perverse qualifier that the valuation must be come from a financial press article or blog post referencing a VC funding round and a whispered valuation.

No matter if that valuation came from funding with “liquidation preferences”. No matter if a startup is so profitable, as is the case with MZ, that no additional funding is required after a Series B round done years ago.

Besides the perversity of MZ being excluded from Unicorn lists, the exclusion is also ironic. Unlike other Unicorns, the public has access to mobile game company “cash register” data supplied for free by analytics companies like App Annie or Think Gaming who record “freemium” game in-app purchases bought through iOS Apple Store or Google Play. Can you imagine discussion if we had access to “cash register” trend data of Uber, AirBnB and Drop Box?

The availability to the public of game revenue rankings has not been recognized for its place in the democratization of financial investing data. This trend was first recognized by famed fund manager Peter Lynch some 40 years ago.

The trend line goes from Lynch’s observation that anyone could see the financial implications of the L’eggs hosiery racks in grocery stores, to weekend box office receipts published by Variety, to near real time stock prices made available for free by Yahoo and Google Finance.

The line continues with real time audio of quarterly conference calls to transcriptions of these calls on SA (thank you SA!) to App Annie daily revenue ranking charts of mobile games by country.

App Annie even has revenue ranking data of games in “geo-lock” test releases in locations like Canada and New Zealand.

Freely available pre-release data of a game’s revenue potential is a step up from other well know pre-release indicators like out of town reviews of a Broadway-bound musical or reports of the reception of a test item on McDonald’s menus in Australia.

In addition to MZ’s absence from Unicorn lists, there are only a handful of published interviews with CEO Gabriel Leydon. You cannot find an interview where the CEO mentions revenue, valuation or IPO.

MZ is a rare Unicorn that walks the walk, not talks the talk.

This is in contrast to Kabam, the other mobile game startup identified as a Unicorn (no longer) who has talked the talk, and not walked the walk lately.

Based on our close observation of Kabam’s press over the past two years, we offer this Letterman-like list of the top 5 signs a Unicorn is talking the talk too much:

5.  Company still has a booth at SXSW five years after first showing.

4. SVPs give more interviews than CEO.

3. CEO quantifies to press revenue and money in bank.

Now back to how we derive a current valuation for MZ.

The table below presents our derivation of a current ARR of $1.1 Billion for GoW, up from our $831 Million estimate made eight months ago. 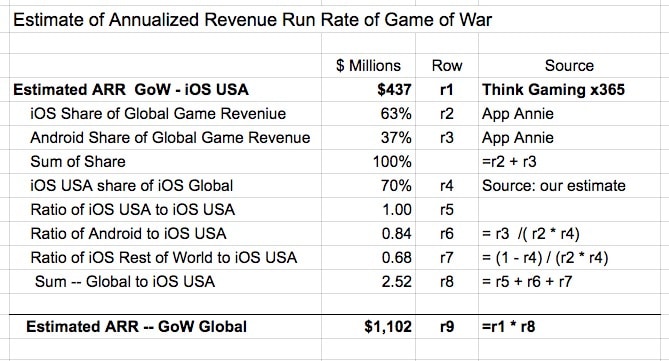 From this you have to subtract the loss of people disgusted by the Upton ads as evidenced by massive amounts of derisive tweeting going on in the last 4 months. The ads themselves, not the ad campaign, has been the only questionable move by MZ since inception. The source of MZ’s revenue growth in the past year has been the combination of organic growth in spending by dedicated players plus new downloads resulting from a $40+ Million ad campaign featuring the busty Kate Upton.

Indeed, we believe that MZ and its flood of Upton ads embedded in other free mobile games was the cause of an unprecedented, simultaneous #1 ranking of the free (ad supported) and paid versions of the same game, Trivia Crack. This was due to millions of freeloading players willingly forking over $2.99 just to avoid the Upton ads.

Below is a table of calculated price-sales ratios, specifically market valuation / annualized run rates, for the three pure play mobile game companies with substantial sales in the USA: Glu Mobile (NYSEMKT:GLU), King Digital (NYSE:KING), and Zynga (NASDAQ:ZNGA). The range is from a low of 1.83 for GLU to a high of 3.19 for ZNGA. 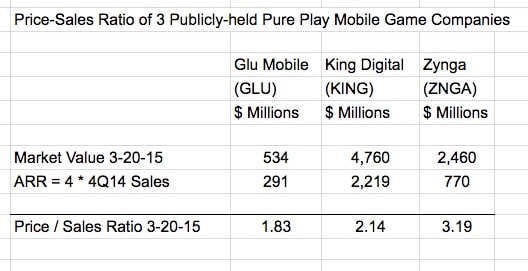 It should be noted that both KING and ZNGA sported 6+ price-sales ratios at the time of their IPOs.

We think that the midpoint of the figures above — 2.5x current ARR — is the appropriate figure to use in valuing MZ. This would place its current valuation at $1.1 Billion * 2.5 = $2.75 Billion.

But MZ has value beyond the ARR of a single game. MZ is not a one hit wonder.

First, MZ is amazingly “lean” in terms of its operations as measured by ARR / employee. This translates into profitability, something rare among Unicorns.

Below is a table that compares MZ’s head count with two big mobile game companies based in San Francisco — the troubled dog of a company, Zynga, and the stumbling startup Kabam.

Both Zynga and Kabam had a string of failed game releases in 2014. Unless the fortunes of these companies change in 2015, there could 1,000+ unemployed mobile game people walking the streets of San Francisco this fall.

While we are on the subject of headcount, the San Jose Business Journal reported that MZ has leased an estimated 140,000 square foot space on Page Mill Road in Palo Alto that used to be Facebook’s old headquarters.

Furthermore, there is an adjacent 140,000 square foot space now leased short term to Nest and Google that may be available to MZ later.

At 250 square feet / employee, this new MZ facility could accommodate an additional 560 employees now with another 560 employees being housed in the adjacent space once Google completes its futuristic new HQ in the Shoreline area of Mountain View.

The other metric of MZ that is amazing is its ratio of current valuation to total VC funding. CrunchBase reports a total of $13.3 Million in VC funding with the last round being a Series B done a full three years ago.VentureBeat reported a total of $16 Million so there could be some $3 Million in angel money not captured by CrunchBase.

We now turn to the case that MZ has value beyond the ARR generated by a single published game.

CEO Gabriel Leydon recently gave a revealing interview to Robert Kolker of Bloomberg Business Week. For us, this was the first interview of any substance that Leydon has given since GoW was released for iOS two years ago.

Leydon may have been asked about revenue, scale, venture capital, and IPO, but evidently he declined to comment. He also did not talk much about the specifics of GoW itself.

A Leydon supplied metric on the hardcore GoW fan:

The average player…plays for two hours per day, in 12-minute sessions, 10 a day.

…Game of War accommodates about 3 million users in simultaneous play, with what the company clocked as a 0.2-second response time…. This is the largest real-time concurrent interactive application ever built. There’s nothing even close to it.

For us, the most interesting section of the interview was Leydon’s belief that the MZ’s chat translation technology would be of value to the likes of Facebook (NASDAQ:FB). (specifically,we presume Facebook’s $19 Billion acquisition WhatsApp)

It’s closer to a social network than it is a video game,” Leydon says. “Facebook has pokes and messages and things like that. In Game of War, you have attacks and friends and chats.” Leydon argues that Game of War’s social interplay is far more complex; among other things, Facebook interactions across language borders are limited.

Leydon, meanwhile, intends to focus on what his new networking technology can accomplish outside the gaming world. He says dozens of companies have asked to license Machine Zone’s translation engine. Its applications, he says, span beyond gaming and into finance, logistics, social networking, and data analysis.

A more intriguing partner for MZ than WhatsApp would be Slack, the fast-growing collaboration and chat startup.

MZ’s history is a inversion of Slack’s. MZ completes what Slack starts. You could argue that MZ is a doppelgänger of Slack.

Slack started out as Tiny Speck, a startup attempting to build a massive multi-player game. The game was never completed, but a side-project piece of software developed for collaboration morphed into the fastest growing SaaS in history.

MZ produced the hit game that Slack could not complete. As a side-project, MZ built a chat translation engine that fills in critical gaps in Slack’s wild success.

MZ’s chat translation engine could be a global enterprise door-opener for Slack.