We are just a couple days into the New Year and already we have our first scratch – Kabam – from lists of technology companies most likely to do a 2015 IPO.

Kabam is a San Francisco-based mobile gaming company that had a track record of licensing movie IP (intellectual property) and producing top 25 revenue-ranking mobile games. But two new, highly-anticipated games based on The Hunger Games and The Lord of the Rings movie IP have had disastrous releases as evidenced by sub-200 App Annie revenue rankings.

As a result, Kabam’s plans for an IPO are kaput for now.

Kabam CEO Kevin Chou confirmed this day in a December 10, 2014 interview with the NYT. But, he blamed the delay on a generally poor environment for mobile game company IPOs created by the Zynga (NASDAQ:ZNGA) and King (NYSE:KING) post-IPO debacles.

In this article, we present App Annie revenue ranking charts of recent releases from Kabam showing terrible gamer response to two of its three most recent releases. In our opinion, this is the real reason for Kabam’s IPO postponement.

We feel that of SA followers, and the investing world in general, are comfortable with the first definition and not the second. There are plenty of articles on SA talking about companies with “plans for an IPO” where a S-1 has never been filed. Uber and Airbnb are the most prominent.

If you are uncomfortable with our definition, please read no further.

So first, we want to present URLs where there is a direct quote from CEO Chou of IPO plans.

Interviewer: Are you thinking about an IPO”

Next a Wall Street Journal interview on February 17, 2014

“WSJ: You have said previously that you are considering an initial public offering. Any updates?

Chou: We had another very serious discussion about an IPO in our board meeting in January. Our revenue is growing rapidly and we have been profitable since 2012. We have over $70 million of cash in our bank account. We are at the scale, where we can actively consider an IPO. But we also want to do it when the time is right, and we don’t have a definitive timeframe yet.”

Finally, a Newslook video interview given around the time of the Alibaba investment in August 2014. Pay attention to segment 3:30-3:53

In early 2014 interviews, CEO Chou was justified in saying that the an plans for a Kabam IPO would be unwise due to Zynga and King’s performance.

But even then, part of the blame was attributable to a 2014 revenue fade of its most successful game The Hobbit: Kingdom of Middle-earth, based on an IP license from Warner Bros. (a division of Time Warner (NYSE:TWX)).

Below is an App Annie revenue ranking chart of The Hobbit game, showing the game’s Top 10 revenue ranking in 2013 and the fade throughout 2014 to a Top 30 position today. 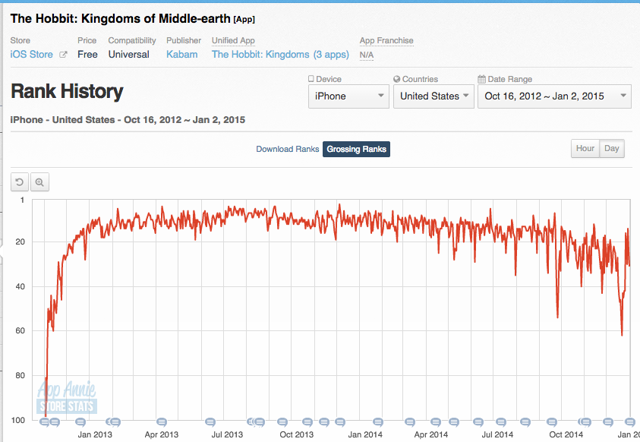 The company reportedly built up its headcount to 850 employees worldwide with 400 in San Francisco, 350 developers in its Beijing studio headed by co-founder Mike Li, and 85 developers in its Vancouver studio.

It accepted a $120M strategic investment from Alibaba that reportedly valued the company at more than $1B. This was on top of $125M in venture capital money raised previously from the likes of Google (NASDAQ:GOOG) (NASDAQ:GOOGL) Ventures, Intel (NASDAQ:INTC) Capital, Warner Bros., MGM and a number of other venture capital companies.

The company even purchased for $18M, spread out over 15 years, for the rights to place “KABAM” on the football field of The University of California at Berkeley, the CEO’s alma mater. (A startup kiss of death?).

In May 2014, Kabam announced a deal with Lions Gate to make a game based on The Hunger Games movie franchise starring Jennifer Lawrence.

This game would be developed by its 300-person Beijing studio, headed by co-founder Michael Li. It was this studio that developed Kingdom of Camelot, Kabam’s first big hit, released in March 2012.

The Hunger Games game was released on November 5, 2014 and the results have been disastrous despite the fact that the movie has been a hit. 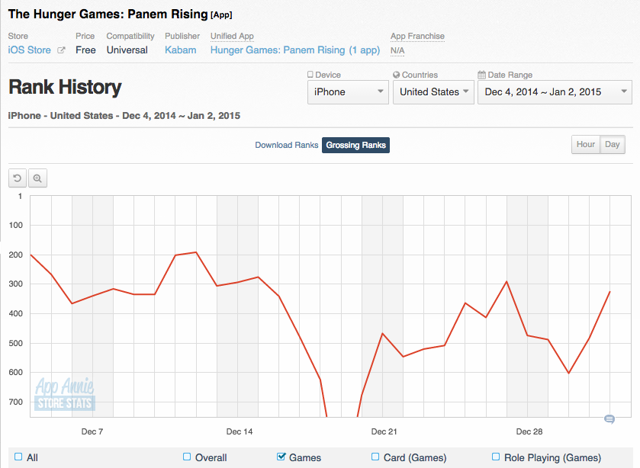 In June 2014, Kabam announced a licensing deal with Warner Bros. to make another game based on The Lord of the Rings IP.

This game was released on October 15, 2014 and again the results have been disastrous despite the fact that movie has been a huge hit: 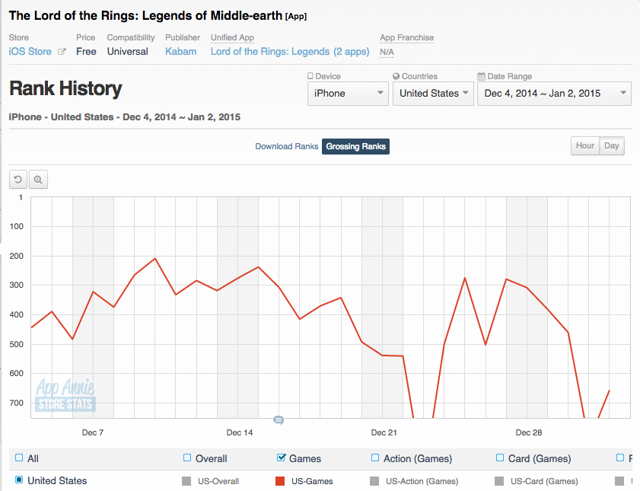 Finally, In July 2014, Kabam announced that its Vancouver studio was at work on a game based on licensed IP from Disney’s Marvel Entertainment Division. On December 10, 2014, the Marvel-based game was released.

Only the Marvel game has performed decently with a current App Annie revenue rank of #33: 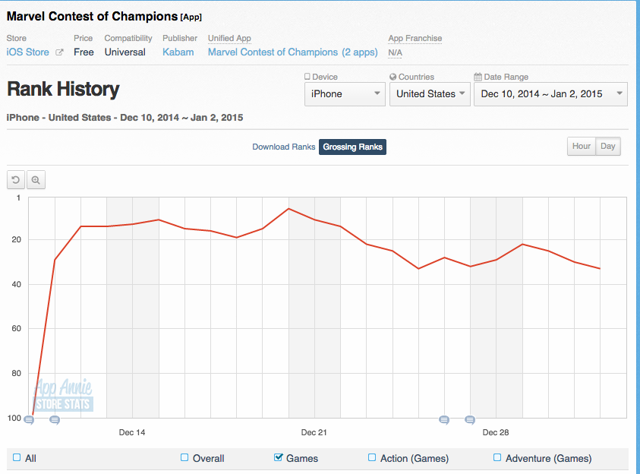 Kabam still might recover in 2015 with scheduled releases of another Marvel-based game and a game based on Mad Max IP licensed from Warner Bros.

But, Kabam’s recent failures raise several questions for us pertaining to Kabam specifically and to the mobile game industry generally: