Kabam is a San Francisco-based mobile gaming company with three hit games each of which has reportedly grossed over $100 M since launching.  In a recent interview with the Wall Street Journal, Kabam’s CEO Kevin Chou disclosed that

Chou said that it “is still gunning for an IPO despite King Digital Entertainment’s (KING) disappointing debut”.

A similar sentiment might have been elicited a year ago from King Digital’s CEO to the effect that King was gunning for an IPO despite Zynga’s (ZNGA) disappointing debut in 2011.

The US mobile gaming industry cannot afford another disappointing IPO.

I am a fan of the US mobile gaming industry. I think the long term prospects are bright. But, the industry has a problem. The problem is NOT that the financials are hit-driven and spiky. The problem is a bad track record of pricing and timing of IPOs.

Like King, these two very successful start-ups are sitting on plenty of cash — estimated at roughly $200 M to $300 M each — generated from these hits. The need for an IPO is not for working capital or even for acquisitions.  The need is to provide liquidity to existing investors and employees with stock options.

There are important lessons from the disappointing IPOs of King and Zynga to be considered ahead of the next IPO:

(2) There is a small window to go public (buy into) successfully. It is between month 4  and month 7 during which a hit game is consistently among Top 10 on the iOS Apple store US revenue ranking charts.

The purpose of this article is to present data and charts supporting these two lessons. First, we present a comparison of IPO and current trailing price-sales (P/S) ratios of King and Zynga.

King went public at the pinnacle of success of its “Billion Dollar Club” game Candy Crush Saga. At the time of its IPO in early March 2014, its Q/Q revenue was flat for 2 quarters.

Zynga went public on the cusp of the transition from PC browser-based games accessed from Facebook to native smartphone games downloaded from app stores. Its stock has dropped 66% since the IPO, caused by the multiplicative effect of declining revenue and a declining P/S ratio.

Based on these two disappointing post-IPO performances, I believe that the next mobile game company IPO should be priced with a reasonable assurance of stock appreciation post-IPO. It should be a win-win, not a win-lose transaction between existing and new investors.

The current trailing P/S ratio of King is 2.23. I think that 2.23 is a win-win standard for pricing the next mobile gaming IPO.

The Wall Street Journal reported that in July 2013, Kabam employees sold $38.5M worth of stock in a private transaction that implied a $700M valuation for the company. According to the Wall Street interview cited above, Kabam estimates that its 2014 revenue will be between $550M am $650M. (We peg it at the low end due to the declining revenue trend in its latest hit game The Hobbit: Kingdoms of Middle-earth.)

A more reasonable pricing of an IPO is not enough. Timing of the IPO matters. The rising revenue trajectory of a hit game is not likely to last beyond 12 months. And while great gaming companies like Kabam, Machine Zone, King, and Supercell have demonstrated an ability to launch multiple hits, the launch dates are often a year or more apart. Mobile gaming companies have just one small window a year to go public.

We review first the timing of the King IPO in light of the disclosed financials in it pre-IPO SEC filing summarized below: 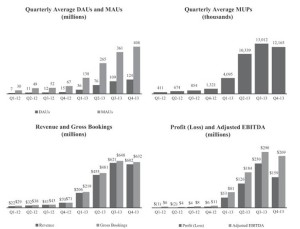 People were horrified when they first saw this graphic depicting flat Q/Q revenue just before the IPO in March 2014. There was a sense of impending doom. And sure enough the stock dropped 16% the day of the IPO.

In hindsight, the time for King to do their IPO would have been in 2Q2013 (June-August) giving management and IPO investors a full 6 months of rising financials.

Before I evaluate the best time for a Kabam IPO, we need to present the results of an one of my earlier papers where I estimated the relation between a specific game’s revenue ranking on app store charts and its dollar revenue. I use revenue ranking charts for iOS Apple Store in the US which are available for free from App Annie.

Occasionally, publicly held companies like King (for the Saga series) and Glu Mobile (for Deer Hunter 2014) have reported quarterly revenues for specific games. This allows an exact correlation with the App Annie revenue rank at the time. Below is a depiction of the Zipf-like power function relation between app store revenue and revenue rank for 4Q2013 with 4 actual data points: 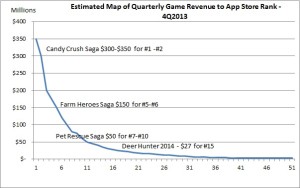 Looking ahead to Kabam’s prospective IPO, we believe that it would be best for them to do it when they have a Top 10 hit on the rise. This would give them at least one game with a rising quarterly run rate of $50M or a yearly run rate of $200M.

Kabam seemed to have an amazing window to go public between January and April 2013. It had not one, but two Top 10 hits: Kingdoms of Camelot: Battle for the North at the pinnacle of its success and a rising star in The Hobbit: Kingdoms of Middle-earth. The Hobbit was just cracking the Top 10 at the end of the window in April 2012.

Kabam’s run’s rate in 1Q2013 was at least $100M. And there was some significant revenue upside post-IPO. Of course, no one knew for sure during 1Q2013 that the rest of 2013 would be so good for Kabam. But, a mobile game that cracks the Top 10 and stays there for 4 month is a sign of some “addiction” and I think that Kabam executives and board members knew that 2013 would be year of rising financials.

Trailing revenue by Kabam’s own account was around $180M for 2012. Valuation of the hypothetical IPO at our recommended 2.23 P/S would have only been only $400M.

Kabam management and board would have been celebrating New Year’s 2014 with a bunch of happy stockholders and employees as the stock would have appreciated 250% post-IPO. And importantly, stockholders would have the liquidity to reduce their holding  if they had a bad feeling about King IPO later in 2014.

Alas, Kabam missed a great window of opportunity to go public between January and April of 2013.

Maybe as a consolation for missing a golden (bears) opportunity, Kabam’s 4 cofounders – all UC-Berkeley alumni, paid the University $18M in December, 2013 for stenciling a big KABAM on the gridiron at Memorial Stadium.

Furthermore, as the charts show below, Kingdoms of Camelot has continued to fade and now is only a Top 50 game. The Hobbit has remained amazingly strong, but shows just enough fade this past month to suggest that the IPO window has closed for Kabam in 2014.

Not to worry, Kabam still has plenty of cash and cache. Its management can see the Kabam name on the Cal football field as they watch their beloved Bears get crushed once again. So what, they are living proof that the industry is not plagued by one-hit wonders.

If Kabam’s existing investors are impatient for an IPO, Kabam has plenty of cash from its hit games to pay millions in dividends.   King did this did this before its IPO, paying out $500 million in dividends in the style of a private-equity dividend recap.

And, it was last week that the Wall Street Journal  reported  that Kabam has struck a deal with Lions Gate to develop mobile games based on the hit movie “Hunger Games”.

It is likely that the next big Kabam hit will be launched in conjunction with the 3rd installment of the Hunger Games scheduled for release in November 2014.  Given their track record for developing hits, I expect a Kabam IPO in 1Q2015. 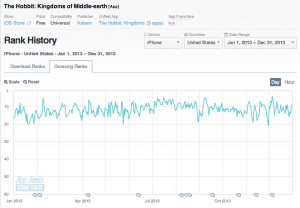