There have been a number of recent surveys asking millennials with substantial cash savings — predominantly young professions in tech and creative positions — what kinds of investments are they interested in.

As if they were disciples of the late great fund manager Peter Lynch, whom they probably never heard of,  they say the are interested in investing in what they use and understand.

Plus, the added benefit of such investments is being able to talk about them to friends who are familiar with the names.  Really, how fun it talking about how great your S&P 500 index fund is doing?

The Peter Lynch approach to investing is wise in some ways, but foolish in other ways as it tends toward undiversified, trendy, high risk investments as opposed to diversified, value-based investments.

And within the last two months, cryptocurrencies have captured their interest.

But, with the bust of crypto and the dim prospect of ever saving enough for a down payment on a “starter” home of $1+ Million in tech heavy areas like the San Francisco Bay Area,  there is an opportunity to come up with new investment vehicles  composed of a diversified portfolio of assets that millennials use and understand.

One recent innovation is something called an eREIT  (electronic Real Estate Investment Trust) like Fundrise — a trendy looking online website for investing as little as $1,000 in a professionally managed portfolio of property REITs.

As an alternative to eREITs, we would like to propose a new straight-up REIT that both should appeals to millenials and should outperform existing REITs.  Obviously, the increased expected ROI comes with the increase risk as of a concentrated portfolio of properties concentrated in about 8 metropolitan areas.

We call this new millenial investment vehicle an HQ2 REIT.

We identify below 8 metropolitan areas  as most likely to be named a future location of  secondary headquarters — know as HQ2 — of big tech companies.

The includes the already announced intent of Amazon to name one city out of 20 finalists for its HQ2 in 2018 plus Apple’s recent announcement that it has plans for its own smaller HQ2.

While unannounced,  it is highly likely that Google and Microsoft will also need to plan for an HQ2 in the next 5 years.    Assuming that it is unlikely that the four companies — Amazon, Apple, Google, and Microsoft — will pick the same metropolitan area, this means that 50% of our 8 most likely choices for an HQ2 will actually get an HQ2.

In terms of arriving at this list, we start with Amazon’s recently narrowed down list of 20 metropolitan areas in the running for its HQ2 that is projected to employ ultimately around 50,000 people.

We next apply a Business Insider assessment of the likelihood (a simple linear ranking 1-20)  of each city being chosen.  We also make an additional division into two group based on median housing prices and proximity to a University with a top 20 Graduate School Computer Science Department in Artificial Intelligence 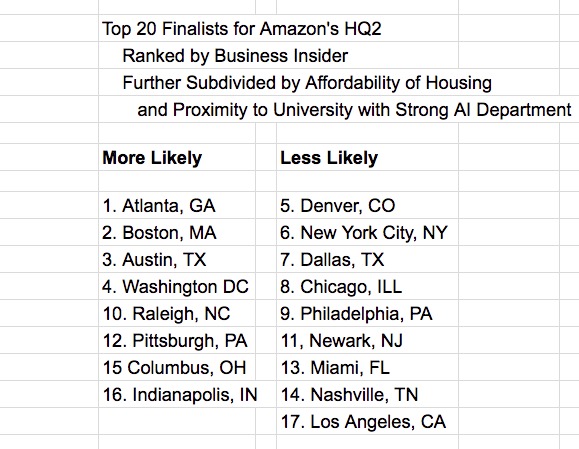