On September 29th, The Bancorp will hold a special meeting of stockholders to vote on a $74 Million secondary offering.

The terms and conditions are an insult to existing institutional investors and there is evidence that The Bancorp genuinely fears that a NO vote might win.

If a NO vote wins, the deciding votes will come from a hedge fund run by the famous behavioral financial theorist Richard Thaler.

If a NO vote wins, we predict that the stock will pop up 10% or more.

In response to the subprime mortgage meltdown a decade ago, the US Congress passed the Dodd-Frank Act of 2009-2010 which, among other things, required FDIC-insured banks to maintain a Tier 1 leverage ratio (capital / average assets) greater that 5%.

This means that a relatively small (e.g. 5%-10%) mark down of a major asset class — whether it be loans outright or collateralized debt obligations — could wipe out a third or more of a bank’s capital. This would almost always cause a bank to fall below the Dodd-Frank standard for a “well-capitalized bank”.

Falling below the Dodd-Frank standard would trigger an existential crisis for the bank, forcing a merger or a private placement, often coupled with a massive shake-up of management and the board.

The Bancorp (NASDAQ:TBBK) has a two and a half years running history of erratic mark-to-market accounting of troubled commercial loans, followed by a series of moves to avoid falling below the Dodd-Frank standard for a “well-capitalized bank.”

We have documented The Bancorp’s problems in three previous articles for Seeking Alpha: The Bancorp: Bad Moon Rising (January 2015); The Bancorp: Continuing Problems with a Discontinued Operation (March 2015); and The Bancorp: Why the Continuing Delays in Filing Its 10-K(May 2015).

We have also published a recent accounting article called The Bancorp: A Test for Post-Enron GAAP that analyzes its late 2014 decision not to consolidate an LLC formed to buy the most troubled portion of its discontinued commercial loan portfolio.

Even though approved by its outside auditor Grant Thornton LLP, we believe that this decision is not in compliance with GAAP and have requested another review by the FDIC and the Federal Reserve Bank.

On July 28, 2016, The Bancorp announced a $31 Million loss for 2Q16, largely due to an unexpected $32 Million in loan mark downs / note write-offs associated with its discontinued commercial loan operation. The Bancorp’s balance sheet had been spared of any hits since the bank first announced the discontinuation of commercial lending operations on October 30, 2014.

During the Conference Call, one analyst quipped, “.. maybe you guys ripped the Band-Aid off this quarter..” and went on to say he was unsure whether these losses were a one-time event or the beginning of a more forthright examination of the valuations of these troubled loan portfolios.

The 2Q16 surprise loss and follow-up conference call sent The Bancorp’s stock down 14% the next day.

Two weeks later on August 8, 2016, The Bancorp announced a $74 Million private placement of new stock with two new investors accompanied by terms and conditions suggesting that the bank was desperate to get a deal done. In particular, the new stock was priced below market at $4.50 a share and the two new investors each were offered a board seat.

We wrote in an SA article that this private placement was a defensive move motivated by a desire to reverse a downward spiral toward the Dodd-Frank standard rather than a positive move to acquire more capital to support more loan-making activity.

We also speculated that the bank’s existing institutional investors would be angered by the terms and conditions because they had invested comparable amounts over the past few years at prices in the $10 to $20 a share range with no offers of board seats.

On August 26th, The Bancorp issued a DEF 14A Proxy notice of a special meeting of shareholders to vote on this secondary offering. The date set was September 29, 2016 at company headquarters in Wilmington, DE with stockholders on record at the end of the day on August 15, 2015 eligible to vote.

In order to hold this meeting, a quorum of ½ of total outstanding shares — 18.9 Million of 37.8 Million total shares on record — must be cast in person or sent in by proxy. At its December 2015 annual meeting, a total of 29 Million votes were cast for the slate of Board members up for re-election. Average tally per Board Member was 25 Million YES, and 4 Million NO.

We think that the total votes in the upcoming special election will exceed 30 Million with 15 Million NO votes needed to stop this secondary offering from going through. The secondary offering can be stopped if at least 6 of the largest institutional investors (see list below) vote NO.

We think the “tipping point” votes will come from its newest and largest institutional investor, the behavioral finance fund Fuller & Thaler Asset Management. (more on them later)

A NO vote would mean that The Bancorp would have to look elsewhere for additional capital to shore up its status as a well-capitalized bank. Another private placement with new investors seems unlikely. A merger with another bank, possibly forced by the FDIC and Federal Reserve Bank, would appear to be the only option left.

In sum, The Bancorp’s Management and the Board would face an existential crisis with a NO vote on September 29, 2016.

While majority NO votes going against Management recommendations are rare, nevertheless there is evidence that The Bancorp’s Management and Board genuinely fear that a NO vote might win.

The evidence for this is an unprecedented flurry of positive PR announcements issued by the bank during the past month. This includes token open market purchases of shares by Directors and Officers, a “cherry-picked” sale of loans from the discontinued portfolio, a inconsequential deal with a Fintech startup, culminating in a vague cost-reduction and layoff announcement:

9/15 — a cost-reduction plan with no specific headcount or reserves booked for severance.

There is also evidence that institutional investors have a heightened interest in the outcome of this special election. First, on the August 15th cutoff date to be eligible to vote, an unprecedented 1.9 Million shares were traded suggesting a large institutional investor really wanted in. (see chart below) 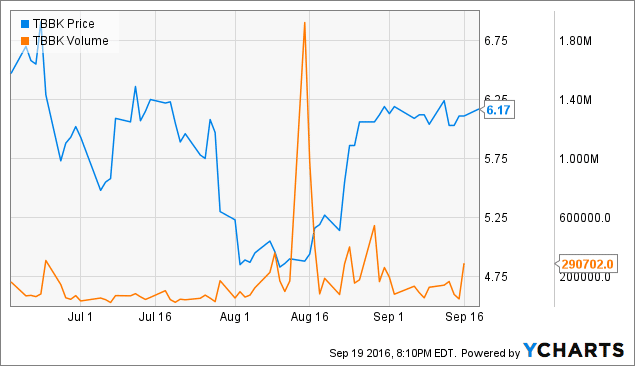 We are not sure, but the August 15th trading activity could have been based on inside information of the cutoff date, because we can find no prior public announcement of that August 15th date.

Second, a NASDAQ listing of The Bancorp’s institutional investors on record as of June 30, 2016 reveals an intriguing new, and now largest, investor. This new investor is Fuller & Thaler Asset Management– a hedge fund run by Richard Thaler, a University of Chicago professor now famous for theories on behavioral finance and “nudge”. 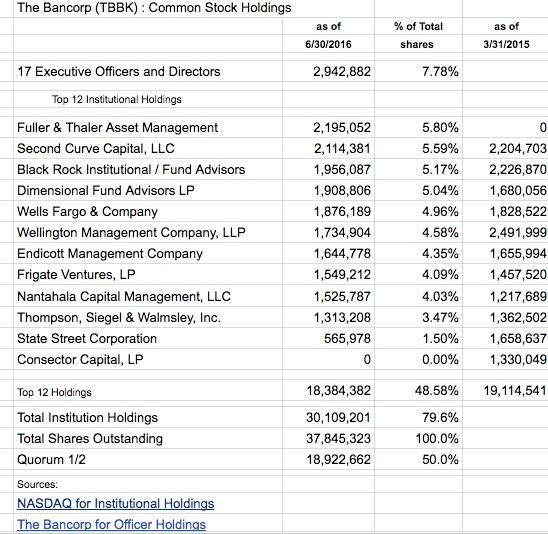 Thaler believes that behavioral economics can uncover cases where the “efficient-market” hypothesis is not working.

A Forbes article on Thaler’s investment strategy said that investing in companies with bad management accompanied by negative sentiment actually led to above average returns. The Bancorp would seem to be a perfect test for Thaler’s theories.

Thaler’s 2.2 Million share accumulation of The Bancorp stock during 2016 suggest that Thaler believe that negative sentiment has gone too far (led by us!) and that TBBK is in an oversold position.

The question is how will Thaler vote his 2.2 Million shares in the upcoming special election? And will the stock pop or drop with a majority NO vote? (We would love your take on these questions in the comments section.)

We think that Thaler will voting NO on the private placement. Also, we believe that the existential crisis caused by a NO vote will be overlooked by the stock market as it will be the first step in getting rid of bad management (fundamentally, the Chairman Daniel G. Cohen) and reversing the negative sentiment.

We predict that TBBK will pop 10% or more IF a NO vote wins. With Management and Board on the way out, the stock become a buy because its current price of $6.00+ a share is 15% below its current tangible book value of about $7.00 a share.

The Bancorp is not the only one facing an existential crisis here. As a financial analyst inclined toward exposing badly managed and overvalued companies, is our mission in life to create opportunities for outsized returns by behavioral finance investors like Richard Thaler?