The roll out of the new Medicare drug benefit program has renewed the debate about who is best at negotiating drug rebates with pharmaceutical manufacturers (“Pharma”).  Those who favor the Federal government point to statistics showing that Medicaid gets significantly better rebates than private sector entities called pharmacy benefit managers (“PBMs”).

The purpose of this paper is to provide new insights into this question by viewing pharmaceutical rebates through bargaining theory. The first insight is that rebates are paid selectively so that averages of rebate rates across all brands are a poor measure of negotiating power.  PBMs’ ability to extract rebates from Pharma is much greater than previously realized when rebate averages are disaggregated.

The second insight derived from bargaining theory is that the rebate transaction is much more complex than the price theory conceptualization of rebates as volume discounts. Drug rebates are tariffs, or entrance fees, paid by Pharma to gatekeepers who promise access to markets with reduced competition.

Medicaid gets more than PBMs, but gives up more in terms of rights to impose co-payments, “prior authorization” restrictions and rights to switch on-patent brand prescriptions to lower cost therapeutic equivalents.  PBMs receive less than Medicaid, but they give up less. Based on the overall goal of cost containment, there is evidence that private sector PBMs do a better job at rebate negotiation than Medicaid.

The Variability of Pharmaceutical Rebates

The Medicaid deal is as follows: in return for being placed on the Medicaid formulary and sheltered from prescription switching and other restrictions, a drug’s manufacturer must rebate the government the greater of 15.1 percent of its average manufacturer’s price (AMP) or the difference between the “best price” given to a private sector reseller and the 15.1 percent minimum.

The CBO letter revealed that thirty-six percent of Medicaid brand drug spend received a “best price” rebate while sixty-four percent of brand drug spend received the minimum.  In addition, the CBO letter provided evidence of the value of a little known clause in the Medicaid deal that gave the government inflation protection.  The value of that clause amounted to a surprisingly large additional rebate of 11.7 percent of AMP in 2003.

Based on the above data, it is possible to disaggregate the 19.6 percent basic Medicaid average into a 27.6 percent average paid on “best price” drugs and the 15.1 percent minimum paid on the rest.

In September of 2005, the Federal Trade Commission (FTC) released a long awaited study of potential conflicts of interest by independent PBMs.   The FTC obtained data on rebate receipts by drug for the “Big Three” independent PBMs—Caremark Rx, Medco Health Solutions, and Express Scripts. These three large PBMs manage about sixty percent of all outpatient prescriptions in the United States.

The FTC also confirmed that Pharma negotiates brand rebate deals only with PBMs, and not retail drugstore chains like Walgreen and CVS. Size does not matter on the buy-side if an entity does not also have the power to affect the demand for brand drugs through discretion in formulary design and compliance.

On the other hand, it is generic drug manufacturers that negotiate volume discount deals with drugstores because only dispensing pharmacies have the power to choose from an array of suppliers of perfect substitutes.

Unfortunately, the FTC failed, or was prohibited, from disclosing any detail about rebates rates by drug or therapeutic class.  However, it is possible to perform a rough disaggregation of the disclosure that the Big Three PBMs received an average of  $6.34 in rebates and data fees per on-patent drug in 2003.

The FTC disclosed that data collection fees paid by Pharma amounted to three percent of wholesale acquisition costs.  Subtracting out these substantial fees, that some allege are masked rebates exempt from inclusion in Medicaid “best price” calculations, the estimate for the average rebate received per brand is $4.22.

The key to disaggregating this average was another disclosure that seventy-one percent of rebate receipts for each PBM were concentrated in the top twenty-five rebate receiving drugs.  Assuming that these highly rebatable brands represent about twenty percent of brand drug prescription volume, it is possible to decompose the $4.22 broad average into rebate components of $14.98 for the top rebate-receiving drugs and $1.53 for the rest.
For comparison purposes, Table 1 presents the conversion of rebate levels to rebate rates based on an assumed average wholesale cost (WAC) or AMP.  While the Big Three PBMs received on average 8.0 percent of AMP across all brands, they receive 22.7 percent of AMP on rebatable drugs.  This is comparable to the 27.6 percent that Medicaid receives as a “best price” rebate. Not too much should be made of differences as the ratio is sensitive to an assumed average for WAC and AMP. 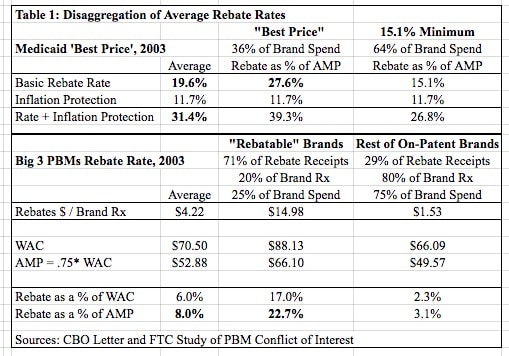 Overall, Medicaid receives more, but this is mostly due to the inflation factor and government’s unique ability to confiscate a 15.1 percent minimum from the all powerful (monopolists) and the all powerless (many competitors).

Disaggregation presents a completely different perspective on the rebate negotiation ability of the Big Three PBMs.   This ability is not something that they care to make transparent for strategic reasons. They also show no inclination to challenge the validity of using broad averages as measures of rebate negotiating ability.

There is much speculation over who actually triggers the Medicaid “best price”.  Some believe that the Big Three PBMs get the “best price” based on their sheer size and a business model bias that favors abstaining from switching of a rebatable brand drug to lower cost generic that garners no rebates.

Others believe that HMOs with captive PBMs, like Kaiser Permanente, trigger the “best price”.  These HMOs know that their members are willing to sacrifice some freedom of choice for competitive premiums.  HMOs with captive PBM operations garner rebates through formulary design and compliance that advantages a single drug in a therapeutic class.

In contrast, the Big 3 PBMs tend not to play favorites, but extract rebates from competing manufacturers by promising each that they will abstain from disadvantageous restrictions and prescription switching.  This passivity allows other forms of competition like advertising and physician “detailing” to take over.

Price theory has been misapplied to the case of pharmaceutical rebates.  Rebates are not volume discounts.  They are not evidence of price discrimination based on elasticity of demand.  It may be incorrect to apply the analysis of “most favored nation” clauses to the Medicaid “best price” formula.

Rebates are the result of a bargain over the surplus that is created in a market characterized by a bilateral oligopoly. Secrecy and credible threats are central to the negotiation of pharmaceutical rebates.

There are several fundamental insights gained by viewing pharmaceutical rebates through bargaining theory.

First, the welfare implications of this deal are complex.  PBMs may not be the populist countervailing force conceptualized by John Kenneth Galbraith.  PBMs may be enabling and codependent, rather than countervailing.

The surplus that is being divided up here is not necessarily fixed.  It is possible that Pharma and PBMs are tacitly colluding to increase the surplus in an intermediate market at the expense of excluded competitors on the sell side and powerless downstream consumers on the buy side.    Evidence that PBMs and the government extract substantial rebates from Pharma is not sufficient proof that their actions improve consumer welfare.

Second, there are two sides to the rebate deal.  The question of who is the best rebate negotiator involves an evaluation of what is received relative to what is given up.  Private sector PBMs receive less than Medicaid, but they give up less in terms of rights to engage in therapeutic interchange, impose usage restrictions, and affect demand through co-payment differentials.

When the Medicaid deal was struck in 1990, generic drugs were not the competitive threat that they are today. In return for rebates, the government promised to place a brand drug on the Medicaid formulary and exempt it from any prescription switching and usage restrictions such “prior authorization”. In 1993, the deal was modified so that generic substitution—an off-patent brand switched to a generic equivalent—was allowed.

Companies paying Medicaid for formulary placement today are still protected from any type of therapeutic interchange—an on-patent brand switched to less costly generic that is a therapeutic equivalent. In addition,  “prior authorization” restrictions cannot be imposed at the national level, but remain a local option that several states have seized as a bargaining chip to extract supplemental rebates from Pharma.

A recent study by the Lewin Group evaluated the performance of different Medicaid plan managers on the basis of overall drug spend delivered, and not narrowly on net unit prices after rebates.

One set of plans—known as Medicaid fee-for-service (FFS)—are eligible for “best price” rebates, but must adhere to Medicaid guidelines limiting therapeutic interchange and usage restriction.  The other set of plans—known as Medicaid managed care organization (MCO)—are privately managed by PBMs and not eligible for Medicaid rebates. However, these PBMs have a lot more discretion in formulary design and compliance.

Even more dramatic was difference in usage rates—number of prescriptions per member per month.  PBMs were able to deliver a usage rate that was fifteen to twenty percentage points lower than Medicaid FFS plans.

Overall, the drug spend of privately managed plans was ten to fifteen percentage points lower than government run plans despite lagging in rebates received from Pharma.

The results of this study clearly demonstrate the weakness of evaluating bargaining agents solely on the basis of rebate rates.  Based on overall goal of cost containment, this study provides evidence that private sector PBMs do a better job at rebate negotiation than Medicaid.