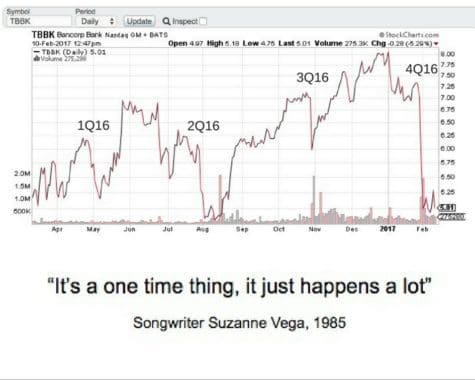 Coinciding with a new CEO Damian Kozlowski, The Bancorp (TBBK) has been forthright in taking additional markdowns on it discontinued commercial loan portfolio. But, this has resulted in three successive quarters of unexpected losses followed by double digit percentage declines in its stock.

This article will present the case that these quarterly losses will continue throughout 2017 culminating in the need once again for a private placement to shore up its status as a “well capitalized bank” per Dodd-Frank.

The stock is NOT long term buy.  Nor is it a short at this time as there will be value funds like the bank’s 5th largest shareholder, Fuller & Thaler (of  behavioral finance fame) that will jump in when the stock falls below $4.75 / share.

At best, it is a short term trade with buys made AFTER quarterly announcements of losses and sells one month later as value funds complete their accumulation.

Systemic problems with mortgage loan operations — originations and modifications — are flows which are capitalized into a long-dated assets or stocks.  Correcting bad origination practices, or changing the flows, does not change the prior stocks created by the flows.

There were systemic problems with the origination and securitization of subprime residential mortgages a decade ago.  The process was corrected. But financial institutions, mostly the Federal Reserve Bank, still have a good portion of those troubled assets on their books.  The flawed origination process was stopped years ago, but the troubled loans still produce losses to this day.

Here is the analogy of the subprime debacle a decade ago to The Bancorp’s “continuing problems with a discontinued operation”:

On October 31, 2014, The Bancorp (TBBK) announced that it was discontinuing its commercial lending operations and set aside for sale a loan portfolio with a principal of a $1,124 Million. During the Conference call, the former CEO Betsy Cohen stated that  “…we do anticipate those sales being completed within the next 120 days.”

The flow process ended. But, two years later the bank still has nearly half of its loan portfolio either on its books or off-loaded to a non-consolidated, self-financed LLC.

There have been surprise loses due to markdowns / write-offs for the past three quarters.  During the 3Q16 conference call, the new CEO Damian Kozlowski sought to reassure rattled analysts by claiming

During the 4Q16 conference call, when pressed about another private placement in late 2017, the CFO Paul Frenkiel said,

“So right now we’re fairly comfortable we can work our way to a higher capital base without raising additional capital at this time.

At the end of this unusually long and testy call with analysts (a first!),  CEO Kozlowski wearily pledged,

“I want to wind it down as quickly as possible…”

The purpose of this article is question all of those statements.

Summary of Our Past Work

We have written a number of papers for Seeking Alpha on The Bancorp’s “continuing problems with its discontinued operations.”  There are two basic points we have tried to make:

We have also written an accounting paper The Bancorp: A Test for Post-Enron GAAP which challenges the bank’s election not to consolidate the LLC created to off-load the most toxic portion of the loan portfolio.

Systemic Problems With The Bancorp’s Operations

Thankfully, the new CEO Damian Kozlowski has eradicated one systematic problem that plagued the bank in the past: a slowness to book markdowns / write-offs.

But,  we have identified two other systematic problems  related to specific bank operations.

The first systemic problem is the bank’s approach to what it known as  “troubled debt restructurings” — described by the bank in its latest 10-Q  as “loans with terms that have been renegotiated to provide a reduction or deferral of interest or principal because of a weakening in the financial positions of the borrowers.”

It turns out that the bank’s commercial lending operations had a practice of “extend and pretend” or “kicking the can down the road” which can disguise the true quality of a “performing loan.”

The classic example of turning a non-performing loan back into a performing loan is to modify the terms to allow for interest only payments for a number of years followed by a huge balloon payment at the end.  Shades of subprime mortgage debacle of a decade ago?

Evidence of the bank’s practices comes from interviews with former employees found in court documents (p.25-29) connected with a class action suit by investors suffering losses for the class period January 2011 through June 2015.

Here is detail explanation (p.27) of the practice from one former bank employee “CW3”

For instance, CW3 stated, “rather than actually calling the loan or forcing a liquidation or calling it what it is, sometimes the action that was taken was funding new money to pay the existing loan down, that was delinquent.” CW3 stated that another technique Bancorp used to “try to turn nonperforming loans into performing ones” was to “switch up” a loan’s amortization, which changed the cash flow and decreased required payments.

That class action lawsuit was settled out-of-court by fake do good lawyers for a paltry $17.5 Million or 15.5% of the $112.5 in total stock market losses claimed by  the plaintiffs.  Worse, the settlement was covered by The Bancorp’s insurance (see 3Q16 10-Q p.32) and so there was no hit to the bank’s financials.

The second systemic problem was the way the bank has wound down this discontinued loan portfolio.

The most toxic portion was sold off first to an unconsolidated LLC accompanied a bare-bones 8-K sneakily filed the day before New Year’s Eve 2014. Two years later in 4Q16, The Bancorp finally provided enough detail to support our early 2015 assessment of the toxicity of  this off-balance sheet portfolio. (see spreadsheet below)

With the most toxic portion removed, the bank has spent the last two years getting rid of the cleanest portions.

About 25% of the principal has been payed off / paid down. The bank touts this as a success. But, this means that the borrowers with the best finances and opportunities to refinance are off the books.

The corollary is that the remaining borrowers have little ability to pay down and have relatively high loan-to-value (LTV) precluding them from refinancing with another lender at a lower interest rate.

The remaining portfolio on the bank’s books has been shopped around to every regional bank in the Mid-Atlantic region for the past two years.

What is left is stuff no regional bank in the Mid-Atlantic would touch.  It’s like they say —  never shop at the farmer’s market at the end of the day as it’s all been picked over.

A Comparison of the Two Loans Portfolios

And, in a later spreadsheet

This data comes from the end of the bank’s announcement of its 4Q16 results.  After two years of providing next to nothing, the bank suddenly discovered financial transparency.  This was likely due to a crescendo of pressure from investors coupled with a new CEO realizing that financial transparency (not the same as GAAP) is best in long run for the bank.

There are three statistics in the spreadsheet below that confirm our suspicions made two years ago that The Bancorp’s strategy was to bundle the most toxic and unsellable loans first and off-load them to an unconsolidated LLC which it obviously had to self-finance as no third-party would partner with them otherwise. 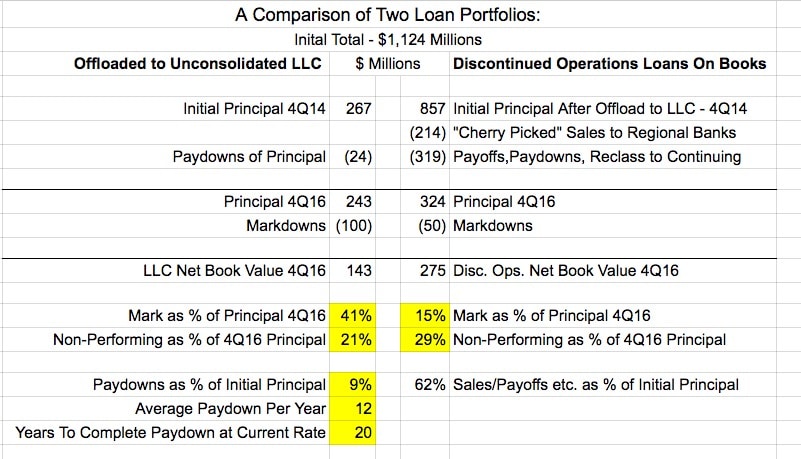 The first piece of confirming data was a 41% AVERAGE markdown of the LLC portfolio despite 77% of loan principals classified “performing.”  What a joke!  The incongruity of these two statistics confirms the meaningless of  “performing” as a sign of loan quality when a loan operation engages in  “extend and pretend.”

Obviously, a lot of the so-called “performing” loans had been modified to interest only with a balloon payment after a number of years. And the non-performing loans probably involve skipped balloon payments rather than skipped flat payments according to a normal amortization schedule.

With no more “extend and pretend” possibilities, or refinance because the borrower is “underwater” with a current loan-to-value (LTV) > 100%, the endgame here is foreclosure followed by Chapter 7 or Chapter 11 followed by sheriff’s sale.

This sequence is similar to the loans largely responsible for The Bancorp’s losses in 2Q16 (The Schuylkill Mall in Frackville, PA) and 3Q16 (The Fashion Square Mall in Orlando, FL).

A third telling statistic is the difference in % paydowns / offs.  Here 62% of the bank’s original portfolio was paid down / off versus a paltry 6% for the LLCs portfolio.

A high % means that the bank’s portfolio contained a lot of borrowers with spare cash to pay and/or appreciating assets — low current LTVs– that provided opportunities to refinance at lower interest rates.

A low % means that the LLC portfolio contains a lot of borrowers with interest first loans with no spare cash to paydown and depreciating assets — “underwater” LTVs > 100% — that provides no opportunity to refinance.

An Estimate of Future Losses

The commercial lending operation was discontinued in 3Q14, but it wasn’t until 2Q16, coinciding with a new CEO,  that The Bancorp finally began to account for the deterioration in the loan quality in the two portfolios.

Below is a chart of the FY16 discontinued portfolio markdowns and LLC note write-offs.

The Bancorp uses mark-to-market accounting for the portfolio still on its books, taking account of specific events like the 3Q16 foreclosure and subsequent Chapter 11 filing of The Fashion Square Mall in Orlando, FL.

The accounting is entirely different with the off-balance sheet portfolio in the LLC.

The LLC itself uses mark-to-market accounting internally per GAAP.  But because the LLC is unconsolidated and overwhelming financed by notes taken back by The Bancorp, the bank uses note valuation accounting here.

Note valuation affords the bank discretion in models and interest rate parameters chosen to calculate discounted present value of the notes.   This variability in possible valuations was discussed at length during the  4Q16 conference call.

All of this is evidenced in the difference between 4Q16 LLC write-off of $13.2 Million discussed during a January 31st private call with analysts and $25 Million write-off discussed February 10th during the 4Q16 conference call.

Below is our estimate of addition mark-to-market markdowns for both portfolios.  The caveat is that our estimated markdowns for the LLC portfolio are internal to the LLC.  Whether or not they are reflected in the opaque, discretion-laden note valuation model used by The Bancorp is another matter. 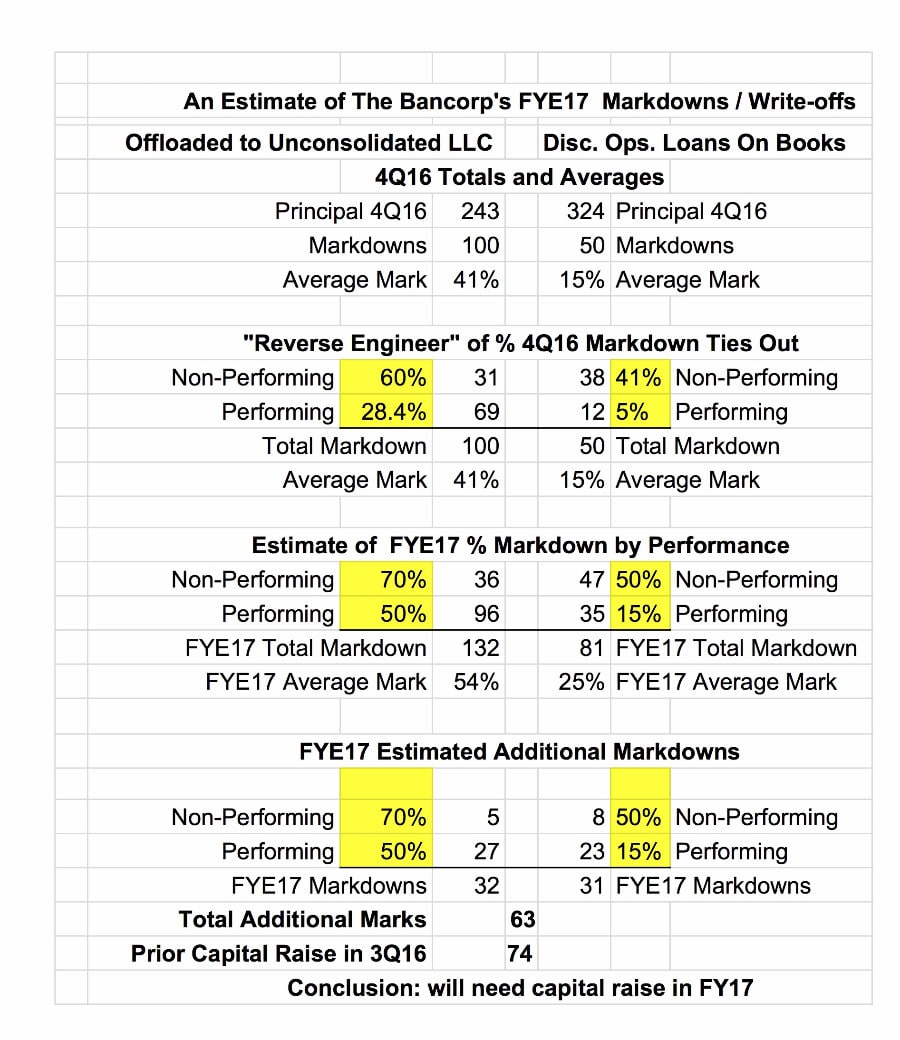 The key to our estimate is a disaggregation of average % markdowns supplied by The Bancorp into markdowns by performance type.  The Bancorp helps us do this for the portfolio still on their books.

We could see the LLC booking  $30+ Million yearly markdowns for the next 3 years.  Again, there is a caveat that what the LLC books internally according to mark-to-market GAAP  is not the same as what The Bancorp books as changes in discounted present values of notes from an unconsolidated LLC (now insolvent according to my reconstruction of its 4Q16 balance sheet).

In any case, the losses will not end soon and will plague the new CEO Kozlowski for the next three years despite his 4Q16 pledge  “I want to wind it down as quickly as possible…”