An Enron moment –– def. when an accounting ploy to offload toxic assets to an unconsolidated LLC backfires.

The Bancorp (NASDAQ: TBBK) is a publicly-held Philadelphia regional bank with a diversified loan portfolio, but also known for being one of largest issuers of reloadable prepaid debit and gift cards in the country.

We have written a number of papers since early 2015 detailing its “continuing problems with a discontinued commercial loan operation.” There have been two basic points we have tried to make:

Once the bank began to take additional markdowns, the hits to equity brought it close to going below the Dodd-Frank standard of a “well-capitalized bank.”

A Deal Between Friends Gone Bad

Buried in The Bancorp’s 3Q17 10-Q filed with the SEC on November 9, 2017, but not mentioned a week earlier when releasing its financials to the public was

“The independent investor in Walnut Street, the securitization into which the Bank sold certain loans when it discontinued its Philadelphia commercial loan operations, has taken actions which may result in litigation.

Based on names in a copy of the Purchase Agreement between The Bancorp and the LLC,  we believe that the sale was between two friendly parties rather than an arm’s-length transaction.

The so-called “independent investor” in the Walnut Street LLC  was Angelo, Gordon & Co (AG & Co.)  out of New York City.  According to its website, AG & Co. is a large $26 Billion manager of  “alternative investments” including commercial real estate mortgage-backed securities (CDOs).

Legally speaking, AG & Co. is an unrelated, third party to The Bancorp and its Chairman Daniel G. Cohen.  But, AG & Co. is listed as a “banner investor” of a firm that merged into Cohen’s latest concoction — a “blank check” IPO called Fintech Acquisition Corp, which we have written about in our paper Fintech Acquisition “Blank Check” IPO: Buzzy Name Fuzzy Aim.

The LLC’s  “Designated Manager”  was Kenneth L. Tepper, head of Kildare Financial Group, an independent contractor that has been used by the FDIC to sort out bankruptcy messes.  The initial address for the LLC was c/o PLANcorp in Gladwyne, PA, another Tepper controlled company.

It turns out Tepper has close ties to The Bancorp. According to a Bloomberg bio, Tepper has served as Managing Director of Financial Institutions Group at Cohen & Co, a firm founded by the family of Chairman Daniel G. Cohen.   In short, Kenneth L. Tepper was a front for The Bancorp when it set up the LLC in 2014.

Finally, we just want to mention that the very name for the LLC — Walnut Street 2014-1 Issuer, LLC. — marks the LLC as part of The Bancorp “family”, not a true partnership.

The Bancorp’s founder, Betsy Z. Cohen, the mother of Bancorp Chairman Daniel G. Cohen, was instrumental  reviving the Walnut Street area of downtown Philadelphia in the 1970s by making risky loans to startup restaurants in the area.  It is ironic that the same Walnut Street name that was associated with a civic-minded banker/mother in the 1970’s is now associated with a rule-bending banker/son now.

In sum, the dispute that The Bancorp quietly buried in Note 13 of its 3Q17 10-Q is about a deal between friends gone bad.

The Toxicity of the Bancorp’s Unconsolidated LLC

On October 31, 2014, The Bancorp announced that it was discontinuing its $1.2 Billion commercial lending operation.  It set aside this portfolio on its balance sheet,  claimed it was marked-to-market, and that the bank was actively seeking buyers.  Since that announcement,  the bank has had considerable trouble selling off the most troubled segments to third-parties.

On the next to the last trading day of 2014 when most of us are making New Year’s plans, The Bancorp issued a terse 8-K saying it had made the first sale to a partnership called Walnut Street 2014-1 Issuer, LLC. 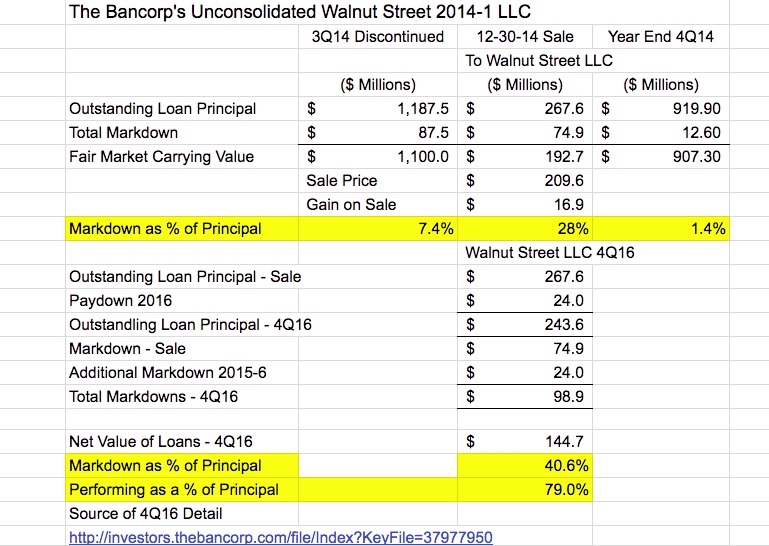 In February, 2017, the Bancorp provided an update  (see above) to the loan portfolio held by its unconsolidated LLC in a note accompanying the release of its 4Q16 financials.

Based on that information we calculated a 40.6% AVERAGE markdown of the LLC portfolio despite 79% of loan principals were classified “performing.”

What a joke! The incongruity of these two statistics confirms the meaninglessness of “performing” as a sign of loan quality when a loan operation engages in “extend and pretend.”

Obviously, a lot of the so-called “performing” loans had been modified to interest only with a balloon payment after a number of years. And the non-performing loans probably involve skipped balloon payments rather than skipped flat payments according to a normal amortization schedule.

We provided more detail about the Bancorp’s commercial loan operations that spawned this toxic loan portfolio in our February 2017 paper The Bancorp: An ‘Extend And Pretend’ Loan Operation That Won’t Go Away.

The Convoluted Structure of the Bancorp’s Unconsolidated LLC

Nine months after the Bancorp finally issued its 2014 10-K (another bank debacle detailed by us elsewhere), the bank revealed that it did not consolidate this LLC into its balance sheet despite the fact that the overwhelming proportion of the LLC’s financing came from the sale of notes back to The Bancorp itself.  The table below is our presentation of the variable interests in the LLC as detailed in Note H of the bank’s 10-Ks: 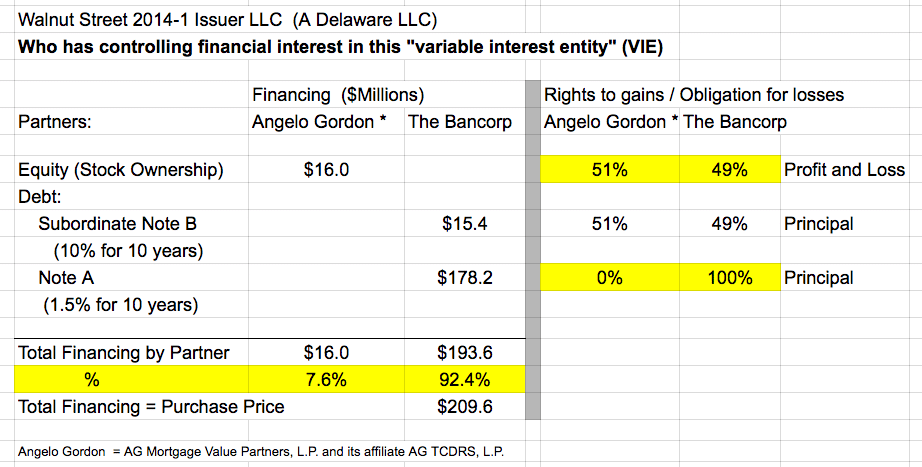 (2) through its interests in the VIE, the obligation to absorb losses or the right to receive benefits from the VIE that could potentially be significant to the VIE.”

The fact that bank waited until the day before New Year’s to disclose this sale in a terse 8-K plus the fact that the structure of the deal was so convoluted,  giving its partner 51% of the voting stock despite practically no “skin in the game”,  suggested to us right from beginning that The Bancorp was testing the limits of Post-Enron GAAP.

In Note H of its 10-K, the bank had nothing to say about who had the most power to make decisions that affected the performance of the LLC.  It just ended the note abruptly with this conclusion:  “The company is not the primary beneficiary, as it does not have the controlling financial interest in WS 2014 (the LLC)  and therefore does not consolidate.”

We have written an accounting paper, The Bancorp: A Test for Post-Enron GAAP, presenting more evidence in support of our believe that it is The Bancorp that controls the LLC and not it’s so-called independent partner Angelo, Gordon & Co with 51% of the equity.

In previous papers, we suggested that the bank’s independent auditor, Grant Thornton LLP, take a harder look at the Bank’s election not to consolidate.   We renew that suggestion here.  Oh…wait…

We see that in July 2017, The Bancorp appointed Mr. Armondo Burnette as Chief Audit Executive and Managing director.  The Bancorp’s website says

“He will work with the Audit Committee and Executive Management to assess, direct and maintain The Bancorp’s audit management plan and oversee internal audits, risk assessments and audit finding remediation”.

It also says that

“Most recently, he was Director, National Business Advisory Services, for Grant Thornton LLP”

An Enron moment –– def. when an accounting ploy to offload toxic assets to an unconsolidated LLC backfires.

Clearly,  the so-called independent partner Angelo, Gordon & Co. (AG&Co) is not happy with the performance of the LLC and wants more cash out now.

AG&Co is a savvy player in the distressed commercial real estate market. They must have had a plan to get enough cash out early to more than cover their $16 Million investment before the flood of defaults inevitably arrives.

The LLC is clearly unprofitable.  Portfolio interest income (cash and accrued) is not enough to offset the $24 Million (non-cash) expense of additional markdowns plus the $6.6 Million in notes payable interest (cash) to The Bancorp and considerable legal expenses (cash).

Even without precise numbers to calculate profitability, the LLC’s is clearly insolvent (assets – liabilities < 0) with $24 Million in additional markdowns since inception wiping out the $16 Million in initial equity.

The LLC is overall cash flow positive only because of the $24 Million in paydowns.

In our opinion, AG&Co has the edge in this dispute as they have 51% of the voting stock.  Even though there might have been documents created at the LLC’s inception that support the Bancorp’s position as to the distribution of cash to partners, it would seem to us that AG&Co has enough votes to rewrite these instructions in their favor.

The moral of this story is that you cannot both control and not control an unconsolidated LLC with a convoluted ownership structure.