Literally “at the 11th hour” on April 26, 2018 the night before TBBK announced 1Q2018 earnings, the bank signed an agreement to sell a troubled Florida hotel construction loan with no loss due generous bank-financing coupled with a pre-packaged bankruptcy that subordinated EB-5 lenders.  This last minute sale avoided the a 1Q 2018 loss that we predicted when this paper was first published on April 8, 2018

Then on May 16, 2018, The bank issued an 8-K announcing that the purchase agreement for the sale of the loan has been terminated.   We can can only speculate that it was the new buyer who got cold feet and backed out, given the spate of lawsuits filed by lawyers representing Chinese EB-5 investors .

The Bancorp still has continuing problems with a discontinued commercial loan portfolio first set aside on its balance sheet over 3 years ago.

The bank will likely book additional markdowns on a $37 Million loan made on a troubled Ft. Lauderdale hotel construction project with the developers finally filing for Chapter 11 bankruptcy protection in March 2018.

We estimate this additional markdown at $7.4 Million — sufficient to cause an overall loss for the bank when it reports its 1Q18 financials late in April 2018.  On the other hand, Wall Street analysts are forecasting a profit for TBBK averaging $.18 / share  or a profit of $10 Million.

Our financial analysis is often directed toward deceptive accounting practices of corporations.  But, it is against our nature to talk to, or work with, opportunistic lawyers suing corporations.

We do not currently have a position in the Bancorp’s stock and do not intend ever to take a position in the stock.  Information in this paper, including forecast financial information, should not be considered as advice or a recommendation to investors or potential investors in relation to holding, purchasing or selling securities.

The Bancorp (NASDAQ: (TBBK) is a publicly-held Philadelphia regional bank with a diversified loan portfolio.  It is also known for being one of largest issuers of reloadable prepaid debit and gift cards in the country.

On March 7, 2018  two Florida LLCs filed for Chapter 11 bankruptcy to stave off foreclosure by TBBK on a $37 Million construction loan for a hotel in Ft. Lauderdale.

Note to analysts privileged to be in on TBBK’s quarterly conference calls:

Ask CEO Damian Kozlowski why a Philadelphia area bank has a history of making bad loans in Florida — this construction project in Ft. Lauderdale and the The Fashion Square Mall in Orlando, Florida discussed later)

During 2017, TBBK put together a string of four straight quarters of profits before deferred tax adjustments, largely because of no new material write downs on loans in its commercial loan portfolio set aside in late 2014 as a “discontinued operation.”

While we may continue to have some gains or costs to resolve some of these credits, we believe that these portfolios are correctly marked, and that these adjustments will not significantly adversely impact our operating performance.

The purpose of this paper is to show that CEO Kozlowski is wrong.  TBBK once again has “continuing problems with its discontinued operations” that very likely will have a significant adverse impact on its 1Q18 financials.

The Timeline of the Las Olas Ocean Resort Loan

On March 7, 2018  the Florida LLCs filed for Chapter 11 bankruptcy protection to stave off foreclosure.

The Bancorp originated the loan in 2013 for $50 Million for the construction of a 12 story hotel called the Las Olas Ocean Resort at 550 Seabreeze Boulevard in Ft. Lauderdale, Florida.  This loan was part of the real estate loan portfolio set aside in late 2014 as a “discontinued operation.”

Five years after the loan origination, the hotel was still unfinished and the loan balance was a reportedly $37 Million.

In any case, we would be totally surprised if the bank failed to make special mention of this loan when it reports its 1Q18 financials sometime in late April 2018. 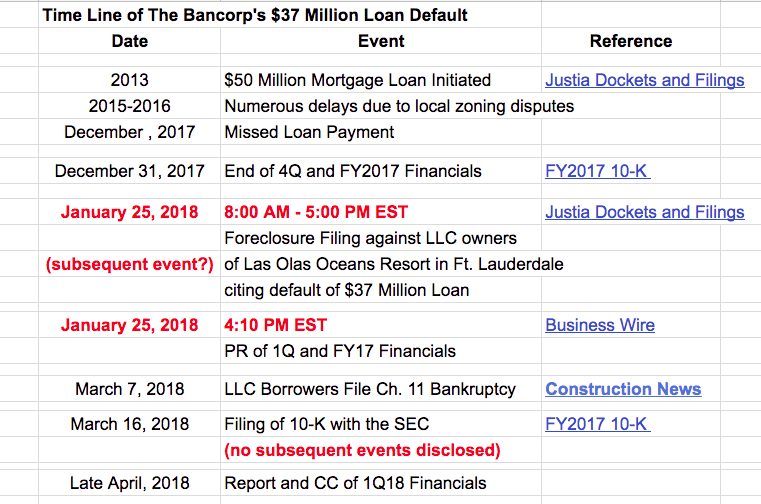 The South Florida Real Estate News  disclosed that financing for this hotel included $30 million in financing from Chinese investors via EB-5, a controversial Federal government program that fast-tracks 10,000 immigrant visas requests in return for at least $500,000 in qualified, job-creating investment

According to the publication, the project suffered numerous delays due to zoning problems and was unfinished at the time of the foreclosure…

“including have to wait nine months for a Broward County approval of architectural and engineering plans. Another six-month delay was in order to comply new Federal Emergency Management Agency flood plain requirements.”

The publication also reported that the lawsuit alleged that the developers

“… failed to finish the resort by its planned March 2017 completion date, failed to make its December 2017 loan payment…,” 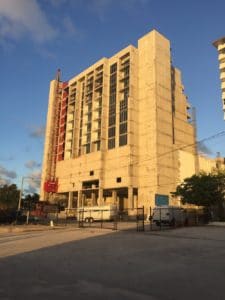 The Bancorp’s Continuing Problems with Its Discontinued Loan Portfolio

On October 31, 2014, The Bancorp announced that it was discontinuing its $1.2 Billion commercial lending operation.  It set aside this portfolio on its balance sheet, claimed it was marked-to-market, and that the bank was actively seeking buyers.  Since that announcement, the bank has had considerable trouble selling off the most troubled segments to third-parties.

We have written a number of papers since early 2015 detailing “continuing problems with its discontinued commercial loan operations.” There have been two basic points we have tried to make:

A full recap of The Bancorp’s problems can be found in our  “The Bancorp: ‘An Extend and Pretend’ Loan Operation That Will Never End”

Throughout 2016, The Bancorp’s (TBBK) stock suffered a series of double digit declines on the day of quarterly earnings announcements dominated by new revelations about defaulted loans followed by foreclosure filing by the bank followed by bankruptcy by the borrower. 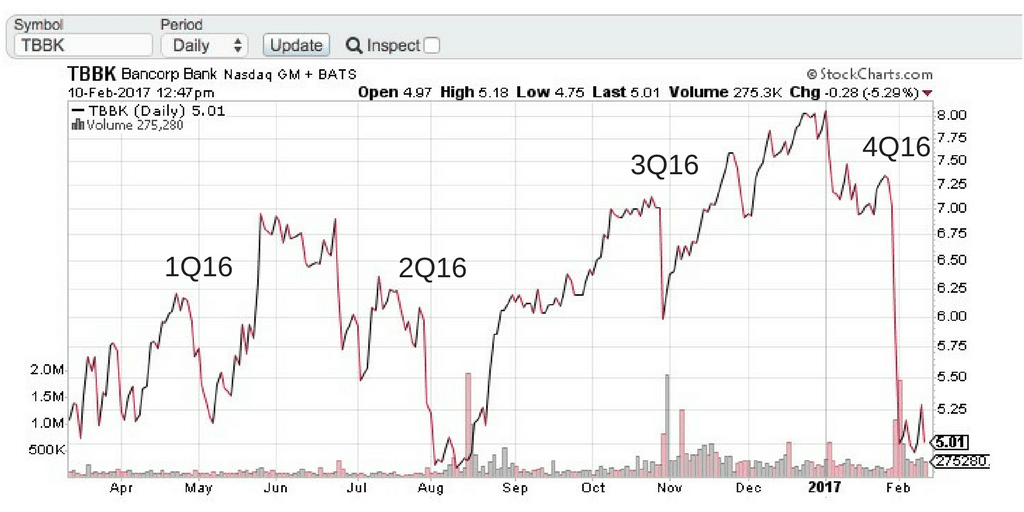 In our opinion, this rise is largely due to an absence of new revelations about its discontinued loan portfolio rather than any fundamental improvement in its continuing operations.

First, a single loan default, and subsequent foreclosure on a borrower who, in turn files for Chapter 11 bankruptcy protection, normally does not have a material impact on publicly-held bank’s quarterly earnings.

But, we think that in this particular loan default will have a material impact on 1Q18 earnings due to a combination of

First, we need to mention that there are two pieces to the bank’s discontinued loan portfolio.  The Bancorp peeled off one piece at the end of 2014 to an unconsolidated entity call Walnut Street LLC.  We have questioned TBBK’s election not to consolidate this LLC in our September 2016 paper The Bancorp: A Test for Post-Enron GAAP.

The other piece TBBK set aside on its balance sheet as a discontinued operation.

It took TBBK two full years to provide real color on the relative toxicity of the two pieces.  Even this was buried at the end of a press release announcing its 4Q16 results in February 2017.  The Bancorp finally disclosed how toxic unconsolidated Walnut Street LLC portfolio was relative to what was kept on the books.

Furthermore,  GAAP allows The Bancorp to value the two portfolios differently. For the portfolio still on its books, TBBK uses mark-to-market accounting with quarterly updates. The accounting is entirely different with the off-balance sheet Walnut Street LLC.

The LLC itself uses mark-to-market accounting internally per GAAP.  But because the LLC is unconsolidated and overwhelming financed by notes taken back by The Bancorp,  TBBK uses note valuation based on cash flow to account for the LLC’s portion of the loan portfolio. This gives them more of a cushion in accounting for changes in loan performance. 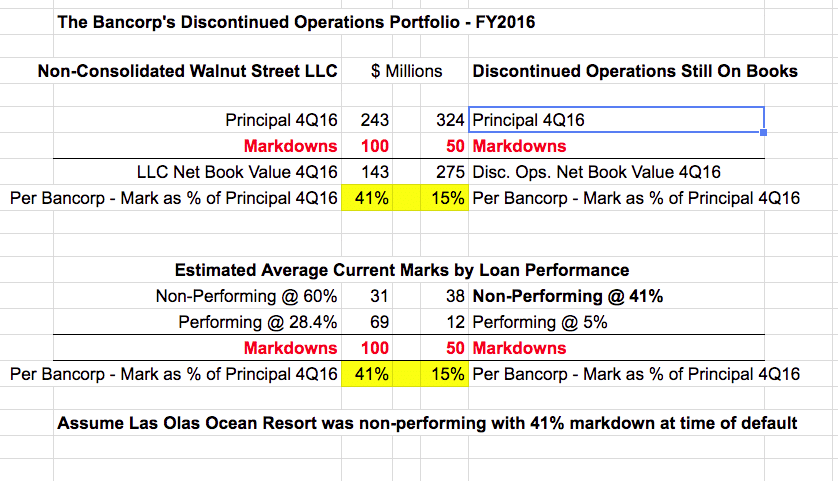 The Bancorp has a history of  late accounting for losses on its discontinued loan portfolios. In 2016, TBBK P&L took a series of material hits to its P&L totalling $77.2 Million.

While the bank does not name the specific loans associated with  markdowns / note write-offs, we believe that a majority of the $77.2 Million came from two loans where the borrowers eventually declared bankruptcy:

We believe that the majority of a 2Q16 markdown / note write-off of $31 Million came from Schuylkill Mall loan.  It was first significant loss the bank recognized since the bank first announced the discontinuation of commercial lending operations on October 30, 2014.

During the 2Q16 Conference Call, one analyst quipped, “.. maybe you guys ripped the Band-Aid off this quarter..” and went on to say he was unsure whether these losses were a one-time event or the beginning of a more forthright examination of the valuations of these troubled loan portfolios.

The bank’s history of catch-up loan reserve accounting support our belief that the bank will have to make additional mark-down in 1Q18.  Even with our estimated 41% markdown already booked on the Las Olas property, we think there will have to be more taken.

To be fair, the Las Olas hotel with its unfinished interior is still  salvageable and located on prime waterfront real estate whereas the Schuylkill Mall was not salvageable and torn done in 2018. The Orlando Fashion Mall was located in a prime area, but requires extensive redevelopment as a hotel and office complex.

The figure for the estimated markdown at the time of the default — 41% — comes from the bank’s 4Q16 disclosure on average markdown of loans in its discontinued loan portfolio.

The figure for the additional markdown due to the default and subsequent Chapter 11 bankruptcy — 20% — is consistent with what we think TBBK took after 2016 Schuylkill Mall and the Fashion Square Mall loan defaults, foreclosures and subsequent bankruptcies. 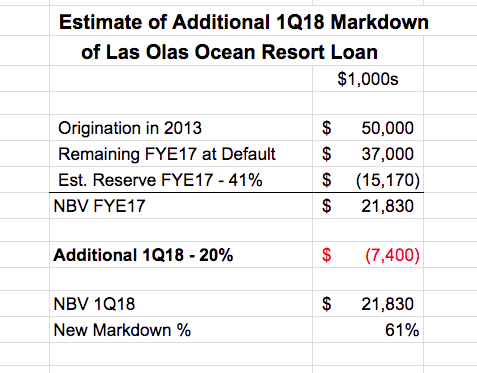 Wall Street analysts currently are forecasting a profit for TBBK in the neighborhood of $10 Million.

This loss will be the first for TBBK in 4 quarters.

Given the toxicity of the loans remaining, we stand by our 2016 paper title: 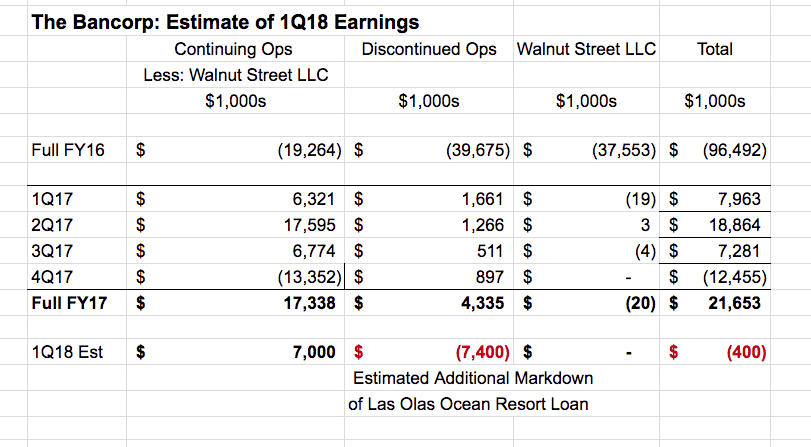