Adexchanger reported that MZ has shut down its independent DSP business Cognant and laid off all 125 employees as well as half of its in-house media buyers.

Facebook has deflected the antitrust case against it by assisting independent demand side platforms (DSPs) like MZ’s (Machine Zone’s) Cognant ® to build strong countervailing platforms.

Facebook is signaling that it does not intend on being “the Microsoft of the 1990s” by throttling competition on the demand side of the ad impression market.

Furthermore,  this cooperation makes sense from a pure business perspective as Facebook is “shifting up the demand curve” of advertisers by working with independent DSPs to improve ROI on ad buys resulting in a willingness to pay higher prices.

Facebook wants to reduce information asymmetry in the ad impression market. It is in its own interest to help make it a market of “peaches” not “lemons” ala George Akerlof’s iconic economics paper “A Market for Lemons”

Indeed, we see the current digital ad impression market as the “mother of all markets for lemons”  accompanied by  a whole new lexicon — clickbait, click farms, fake news,  brand safety, and walled gardens.

The intermediate market for digital ad impressions is now dominated by the Google – Facebook duopoly.  In 2017, the duopoly’s total share of ad impression sales was estimated at 60.4% (see below) . 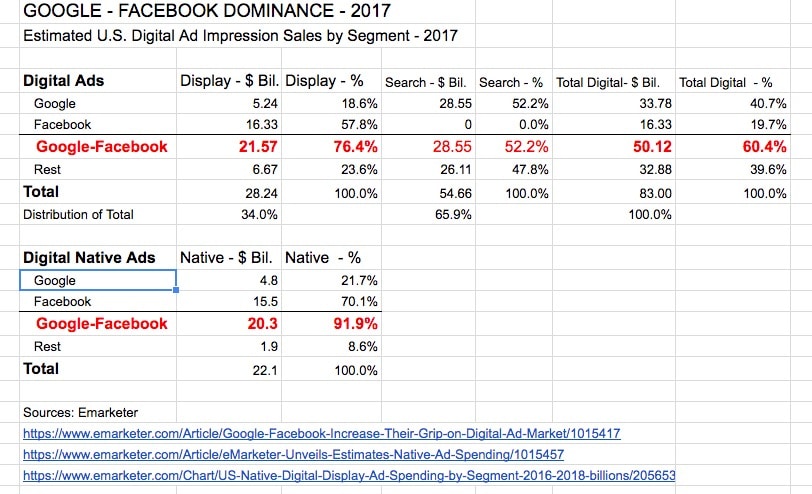 On the extreme demand-side of the digital ad impression market are advertisers wishing to buy ad impressions and on the extreme sell-side are content publishers selling ad impressions.  In between  is a complex web of software intermediaries that would dumbfound (and still does) Madison Avenue. 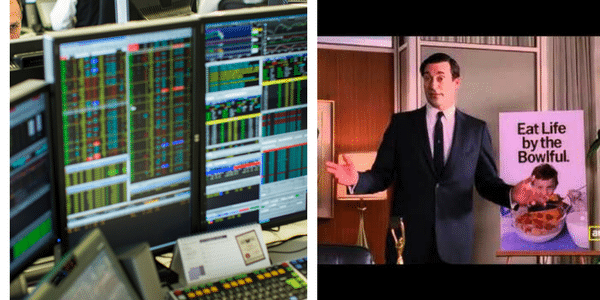 The data above largely reflects ads embedded in mobile and PC content.  The market for real time ad impressions embedded in ad-supported streaming TV — as opposed to subscription-supported Netflix and Amazon Prime — is just beginning.

If you ask people in the tech world what is the business of Facebook and Google, they would not say social networking or internet search or video delivery.  They would say the two dominate the performance marketing business — selling ads with quantifiable (as opposed to estimable ala Nielsen) results as in costs per click or impression.

Between advertisers and publishers is an adtech intermediate market. It consists of supply-side platforms (SSPs) also dominated by Google and Facebook with Amazon being a fast riser in the SSP space.

Next comes ad exchanges where transactions and pricing takes place increasingly via real-time auctions.  Google dominates with DoubleClick AdExchange.  Facebook launched its own FBX in 2011 but let it slowly die over the next three years.

Next comes demand side platforms (DSPs), which is the most competitive segment.  Google has its own internal DSP called DoubleClick Bid Manager which dominates ad buying both on Google’s “walled garden” of search and on its own subsidiary YouTube.

Facebook has an internal DSP called Facebook Ad Manager useful to small and medium business wishing to buy ads within its eponymous “walled garden.” But, Facebook seems to be holding back from customizing its internal DSP to cater to large advertisers with unique needs.

Because of the publicity surrounding Cambridge Analytica, Facebook is under enormous pressure to pull back all the ways its allows third parties to access its user data.  We think it would be “throwing out the baby with the bathwater” if Facebook were to  pullback of all adtech — SSP, AdEx, and DSP — within its “walled garden”. 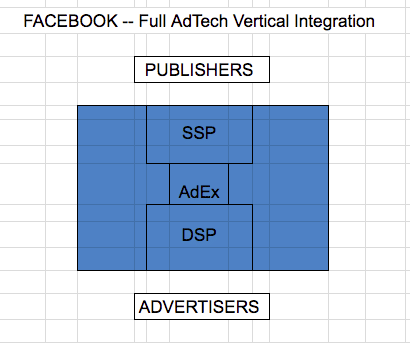 Rather, it needs all the help it can in filtering out “lemons”.  It is in Facebook’s own interest to foster independent DSP’s with “clean room” access (see below) to data. 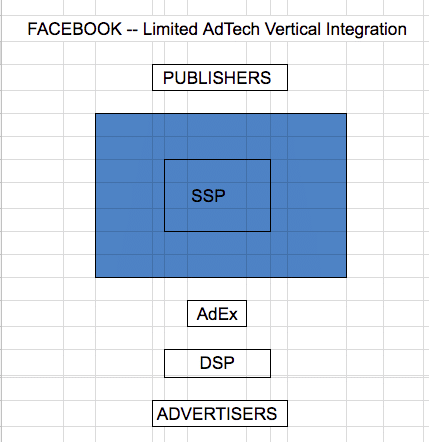 The Focus of Antitrust Concerns

The sheer scale of the Google – Facebook duopoly is the current focus of antitrust concerns. But, the extent of the duopoly’s vertical integration —  owning the full vertical stack of businesses from content publishing to a SSP to an ad exchange to a DSP — needs to be analyzed in much greater detail by adtech experts for potential antitrust violations.

Antitrust concerns so far has focused on the supply side with the most recent flare-up being Facebook’s decision to limit third-party news feeds inserted into the social graphs of Facebook users.

This supply-side focus on content is understandable as such developments hurt the job prospects of the very paid  tech and business writers [ not us 😉 ] who write about Google and Facebook.

In December 2017, Tech Crunch published an article describing how an internal Facebook team of 100 engineers has been working with big advertisers to develop their own customized DSPs.

Right off the bat, this revelation is a clear sign that Facebook today does not intend on repeating the anticompetitive tactics used by Microsoft in the mid 1990s.  Back then, Microsoft used its control over the dominant Windows PC operating system to throttle the ability of users to replace Microsoft’s own default browser with a popular third-party browser developed by Netscape.

Notwithstanding the antitrust motivation for supporting independent DSPs, Facebook’s initiative is good from a pure business perspective.  Facebook realizes that improving ROI on purchased ad impressions via reduced information asymmetry translates into a willingness by advertisers to make higher bids for “peaches” instead of “lemons” ala George Akerlof’s iconic economics paper “The Market for Lemons”.

Indeed, we see the current digital ad impression market as the “mother of all markets for lemons”  including the following list of extreme conditions for markets with information asymmetry between sellers and buyers: 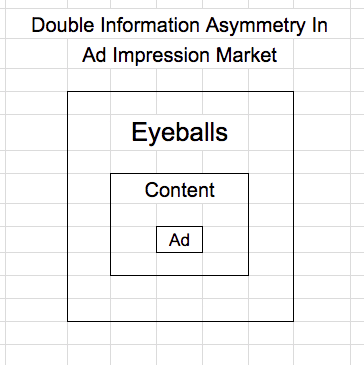 Facebook recognizes that its supply of ad impressions has reached a ceiling due to user annoyance of ads in their feeds.  With supply now inelastic within Facebook, there are three options open to increasing revenue — quantity times unit price. 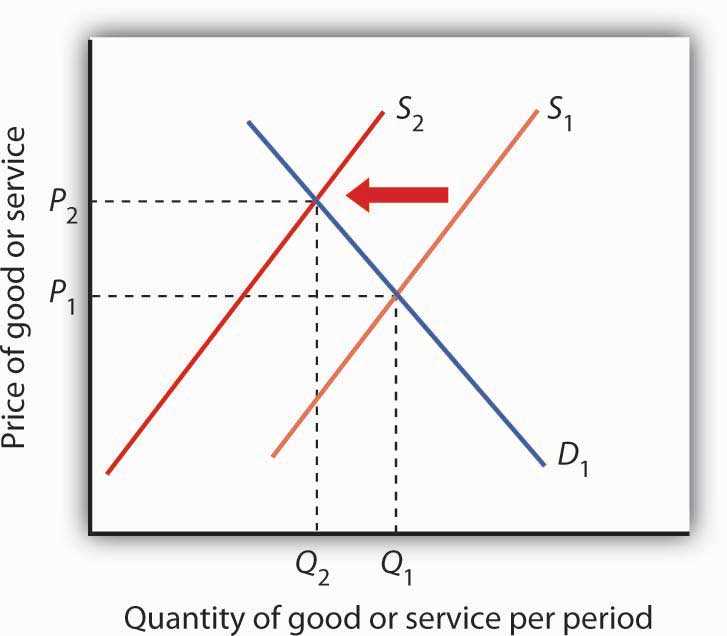 Facebook is signaling that it is giving option 3 a try.

Here is a great quote from an April 2017 adExchanger article on digital ad prices as a reflection of quality and the opportunity for Facebook to receive higher prices — shift up the demand curve  — from advertisers and agencies using more discriminating DSPs.

“We buy it cheaper” used to be the lead differentiator in a pitch. Today, agencies that lead with “We can buy digital cheaper” have a sign taped to their back that says, “We buy lots of fraud.” Low prices in digital media are not only no longer a badge of honor, they’re a warning sign.

Here is a quote from the Tech Crunch article on the ROI improvement coming from DSPs built with the assistance of the Facebook engineering team:

Facebook says that on average, clients working with the solutions engineering team see their return on ad spend improve by 100 percent.

The article mentioned that after working with the Facebook team to improve the performance of its own internal DSP,  the mobile game company MZ (formerly Machine Zone),  has spun off its internal DSP as an independent business called Cognant ®.

It should be noted that even before the spin-off, MZ was already the largest “direct response” advertiser in the world and likely on Facebook itself.

As Facebook’s largest direct response advertiser, MZ was the likely first recipient of access to Facebook user data located in “clean rooms” on Facebook servers.  Here is a February 28, 2017 description by AdExchanger of the linkage:

Google and Facebook are each responding to advertiser demands for more data. Facebook does data-sharing deals on the DL with large marketers that push for it.

MZ’ DSP is also likely an early adopter of the Unicorn startup Sprinklr for CRM and Martech:

Sprinklr is the most complete social media management system for the enterprise. We help the world’s largest brands do marketing, advertising, care, sales, research, and commerce on Facebook, Twitter, LinkedIn, and 21 other channels globally – all on one integrated platform.

A tight integration of Sprinklr + MZ’s Cognant, especially around real-time brand management (e.g., seeing the impact of localized Facebook ads for McDonald’s garlic fries on purchases at local outlets in real-time)  would certainly be a threat to an earlier generation of cloud-based CRM,  like salesforce.com and Oracle, that draws on dated information.

MZ’s DSP very likely has benefited from face-to-face meetings with the Facebook team located in Menlo Park not more than a 20 minute drive from the MZ’s headquarters in Palo Alto.  Indeed, MZ’s current HQ in Palo Alto on Page Mill Road across from Stanford was the former HQ of Facebook. 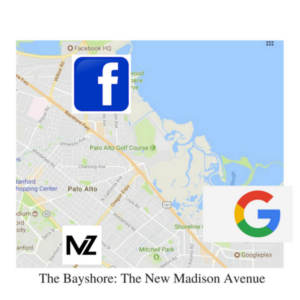 It should be noted that MZ is also located close to Google’s HQ  in Mountain View. It will be interesting to see if Google might offer similar assistance.

We would expect Google to lag behind Facebook as Google’s supply of ad impressions is more elastic.  Google can increase revenue via increasing the supply of impressions especially on its YouTube subsidiary.

Facebook has no room in its “wall-garden” for more ad impressions. It will be interesting to see how much Facebook derives revenue from its retargeting business outside its “walled garden.”  Otherwise, the only way Facebook can increase revenue is by working to improve ROI on the demand side and “shift up the demand curve.”

The question is can MZ’s DSP Cognant and maybe a few other DSPs scale sufficiently and demonstrate enough independence to be called true countervailing powers to the Facebook – Google duopoly?

Or will Cognant become a “front” of  independence “playing nice” with Facebook?  Will Cognant become some fake sign of competition to be trotted out by Facebook lawyers in some antitrust lawsuit down the road?

Such an antitrust lawsuit will inevitably dwell on ad price trends as measured by cost-per-click (CPC).  Consider the following graph showing that Facebook’s CPC  rose 136% in the first six months of 2017.

For example, the upward trend could be due in part to a secular improvement in ad ROI delivered by independent DSPs with help of Facebook supplied application programming interfaces (APIs), thus reducing information asymmetry on the part of buyers.

Of course, it takes more than API hooks for a DSP to deliver significant improvements in ad ROI.  It takes a DSP that can build a sophisticated real-time programmatic bid engine and a real-time predictive analytics platform that feeds off Facebook-supplied user data and spits out bids with improved click-through rates.

Right now, we believe that the only independent DSP that has this capability is MZ ‘s Cognant.

In sum, Facebook has deflected the antitrust case against it by assisting independent demand side platforms (DSPs) like MZ’s (Machine Zone’s) Cognant ® to build strong countervailing platforms.